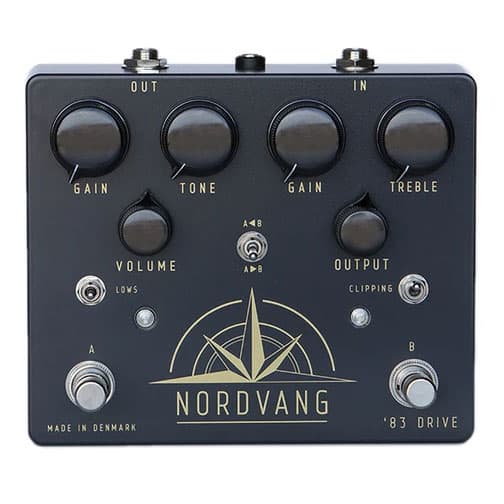 For such a small country, Denmark has a remarkable tradition in the guitar pedal niche (think TC Electronic and T-Rex, to mention just two), so there’s always a lot of curiosity when new Danish builders get introduced to the stompbox scene.

Nordvang debuted with a bang back in April by launching not one but three gain pedals, all sharing different flavors within a dual-channel format – where at least one channel is always a Klon-style overdrive (we said “at least” because the Wingman features two of them!).

The ’83 Drive offers a Blues Breaker-style circuit on side A (left side) and a Centaur Klon clone on side B (right side). Each side features its own footswitch, Gain, Tone/Treble and Output/Volume knob, and a two-way toggle switch to widen the sonic palette:

The Lows switch changes the bass response of the circuit. Internally you find four sets of dip switches (gain, soft clipping, symmetrical/asymmetrical clipping, hard clipping) that further enables you to tweak your tone.
The Clipping switch toggles between a pair of germanium or schottky clipping diodes.

An extra toggle switch in the middle of the pedal allows the player to switch the order of the circuits.

These pedals are getting a good response and the first batch is already sold out. We added the Wingman to our in depth article about the Best Klon Centaur Clones.

Check out the videos below!

‘83 Drive is a new dual overdrive guitar pedal and the ultimate tone machine, providing a variety of delicious tones. It can be used as an always on drive tone all the way to a mid boosting lead tone. Our take on the legendary K-style overdrive and the Black Box Bluesbreaker, it features two independent overdrives, giving you two classic drive sounds favored by many guitarists in one enclosure.

Our inspiration for the ’83 Drive came from our enthusiasm for each of the two pedals used alone and by how amazing they sounded when stacked.

Both pedals have played an important part in the live guitar tones of John Mayer through the years, as the pre drive he stacks into his TS10 to obtain his lead tone. We decided for ’83 Drive as the number 83 is a significant number to JM.

We have recreated the circuits staying true to the originals, but we’ve made the BB circuit true bypass with additional switching options for tweaking and increased the headroom up to 18 Volts. We have kept the buffer in on the K-style side of the circuit.

The ’83 Drive is divided into a side A (left) and a side B (right), separated by the order toggle switch in the middle which flips the internal order of the effects and hence the signal path from guitar to amp.

Side A features the BB-style circuit with external knobs for GAIN, TONE, VOLUME and a three position toggle switch labeled LOWS. The lows switch changes the bass response of the circuit. Internally you find four sets of dip switches (gain, soft clipping, symmetrical/asymmetrical clipping, hard clipping) that further enables you to tweak your tone.

The side B features the K-style circuit with external knobs for GAIN, TREBLE, OUTPUT and a two position toggle switch labeled CLIPPING. The clipping switch toggles between a pair of germanium or schottky clipping diodes.

Both sides can be used separately or stacked.

– Exact replica of the K-circuit.
– External two position Clipping switch to switch between a pair of Germanium – or a pair of Schottky clipping diodes in the overdrive gain stage.
– The germanium diodes we use are original Sylvania 1N34A (as long as our stock lasts)
External switch to choose in which order the signal passes through the two circuits.