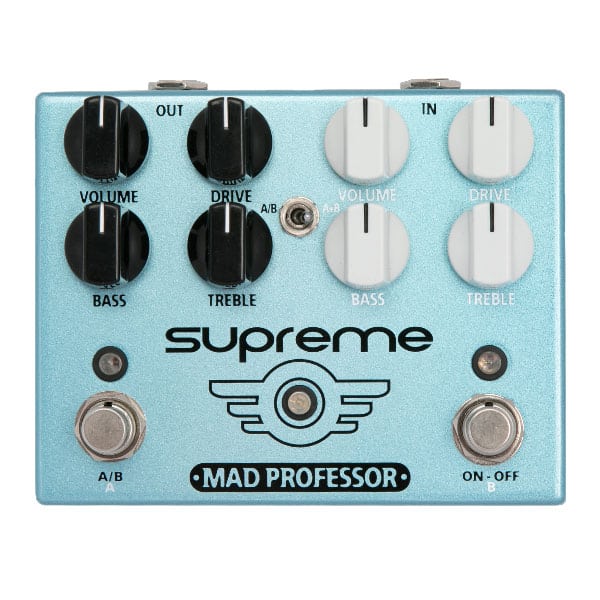 The result is a two-in-one pedal with a Channel A mostly based on the company’s low gain Royal Blue Overdrive (which shines with a neck pickup) and Channel B featuring a completely original circuit that delivers a ”power amp” response with a lot of headroom and works wonder with a bridge pickup.

Each channel has its own controls featuring Volume, Gain Bass and Treble, and a toggle switch in the middle allows you to route them in parallel (A/B) or on top of each other (A+B). Stacking the drives will lead you into another huge variety of more compressed and driven tones.

Here are some videos.

The pedal is called Supreme because it simply excels in both tone and functionality. Supreme was born in collaboration with the world famous tone connoisseur Matt Schofield. Matt was looking after the best guitar overdrive tones possible and a specific functionality: two pedals in one, switching from one side to the other with just a single press on the switch.

The tones were set for a great all around boost to low gain drive on the A side used mostly on a neck pickup. The A side is heavily based on our famous Royal Blue Overdrive pedal. And for the B side a fat dynamic tone containing some ”power amp” response with a lot of headroom. The B side is a completely new design and is used mostly on a bridge pickup. This is the way Matt prefers to use the Supreme pedal.

No matter which kind of guitar is your preference, you can fine tune the other side for the neck pickup and the other for bridge and have optimized tones for your pickups by a single press on the switch. Both sides have very versatile EQ sections containing both treble and bass controls for the best results.

Another use of the Supreme would be for example playing into a single channel amp using the other side for a rhythm tone and other side for leads with more volume as well. You have two different gain and volume levels reachable by a single press on the switch going from side A to side B. In another words, you have the ability to easily bypass or switch between two ”channels” with full individual EQ/gain/volume without using a complex programmable switcher!

The fun doesn’t even end here as you can also set both of the drives into independent mode and stack them. Stacking the drives will lead you into another huge variety of tones Supreme will deliver. Supreme in stacking mode works best in case you’re in need for more gain and compression.

You choose what is the best use of Supreme, the ultimate guitar overdrive pedal.