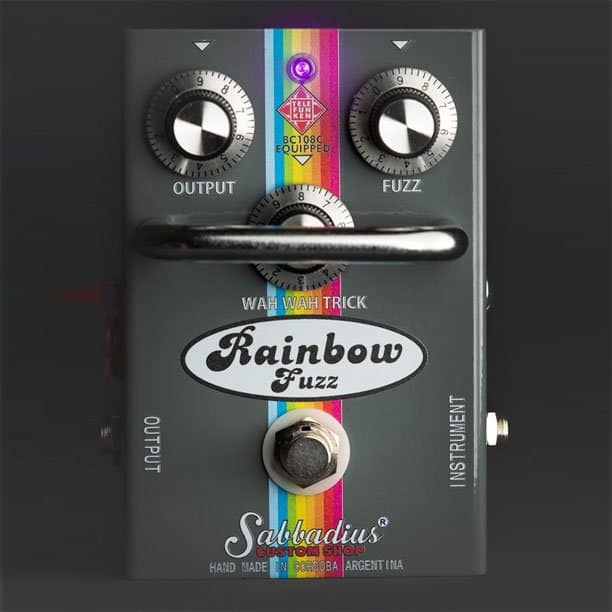 Based on Telefunken BC108C silicon transistors, the pedal features a knob named “Wah Wah Trick” which has functionality that extends beyond its moniker. Playing with that knob, in fact, not only will allow the player to make the pedal work well with wah pedals placed before or after in the chain (many fuzzes don’t work well with wahs), but it can also help “clean up” your fuzz so that it sounds less “fizzy” and close to an overdrive tone.

Hear the Sabbadius Rainbow Fuzz in action in the video below.

Most influential Fuzz pedal users in history, the one and only JIMI HENDRIX.

The transistors used in his favorite silicon fuzz were the TFK Bc108C from Telefunken.

The Sabbadius Rainbow Fuzz BC108C has a few features that make this Fuzz pedal Unique on the market today, it has a knob called “WAH WAH TRICK” that allows you to make this Fuzz is a “Wah Wah friendly”, this means that you can use this fuzz pedal with a wah wah without have that annoying coupler-like noise that makes fuzz pedals not compatible with wah wah pedals and you won’t be able to make your wah wah sound or module like it should. You can place the Sabbadius Rainbow Fuzz BC108C before or after wah wah pedal and knob use WAH WAH TRICK to set the correct position so that noise disappears. Another thing to keep in mind when using Sabbadius Rainbow Fuzz BC108C is that if you don’t want to use a wah wah with the fuzz, you can use the WAH WAH TRICK as a “Fuzz cleaner”, this means that can clean up a bit of the “fizz” from the fuzz that makes it a kind of Overdrive pedal, creating those glassy tones everyone wants to get in a fuzz unit. You can lower the volume of your guitar and clean the fuzz effect as if you weren’t using a pedal of fuzz, so there is a little difference between the clean sound of your guitar and the

WAH WAH TRICK to the minimum.

The fuzz knob is a CUSTOM MADE potentiometer made for SABBADIUS Electronics with aspecial curve to have the best control on a fuzz pedal from 0 to 10, giving you the ability to use the full potential of the knob range thus giving more control of the FUZZ.

The OUTPUT knob controls the volume of the fuzz.

The FUZZ knob controls the amount of FUZZ that is added to the sound. This control can also

be manipulated by the guitar’s volume control. As I mentioned, the potentiometer on the FUZZ

The WAH WAH TRICK knob lets you use a Wah-Wah pedal effect with the fuzz. In several

the sweep of the same is used or the Wah Wah effect does not appear thus losing the modulation effect. With this control it is possible to change the fuzz sound before or after the wah wah, thus producing an original wah-wah sound and fuzz together and modulate to perfection. This function can be activated or disabled to control and generate “fizziness” in the FUZZ effect or to use it as

booster. It is an excellent pedal for guitar with single coil and Humbuckers pickups.