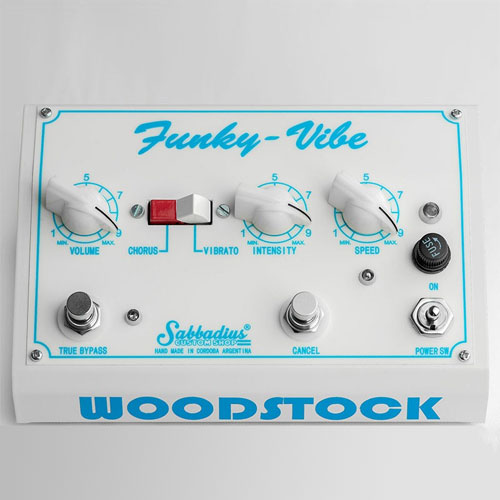 Hailing from Argentina, the Sabbadius | Funky-Vibe line is a thoroughly researched Uni-Vibe recreation that captures the “chewy” sound of the Uni-Vibes Jimi Hendrix played in 1969 and 1970. A Cancel footswitch allows you to use the pedal as a Pre-Amp with the character and color of the original Uni-Vibe effect.

The Woodstock version has 7mm custom-made CdS Photocells made exclusive for Sabbadius, which increases the intensity of the throb and features an improved Speed function that allows for slower and faster rates than the original.

This Sabbadius Funky-Vibe line is featured in our article on the Best Uni-Vibe Pedals.

Jimi Hendrix played at WOODSTOCK  in 1969 for 50,000 people.  Jimi said it was one of the best performances and experiences he had ever had. All dressed up in a white leather jacket with little turquoise and green balls on its leather fringe and light blue Oxford bellbottom pants, Jimi wielded his amazing Olympic White, maple necked Fender Stratocaster.

The SABBADIUS WOODSTOCK Funky-Vibe version has 7mm CUSTOM-MADE CdS Photocells made exclusive for SABBADIUS and an original 1970’s Japanese lamp bulb to give that “CHEWY”classic tone of a good Uni-Vibe. The SABBADIUS WOODSTOCK Funky-Vibe version has more control in the SPEED knob that goes from really SLOW SPEEDS to crazy FAST SPEEDS to hit all the parameters a SPEED knob needs to cover in a Uni-Vibe type pedal.

The New 7mm CdS Photocells CUSTOM-MADE for SABBADIUS will increase the throb INTENSITY in all aspects and you are going to feel that swirling sound that JIMI HENDRIX EXPERIENCED with THE original Uni-Vibe HE used.

* The transistors used here are the Matsushita 2sC828 for signal path and 2sC539 for the Pre-Amp section like in the original Uni-Vibe. The pedal features 3 knobs, which set VOLUME, INTENSITY, and SPEED. It has a 1/4-inch (6.5 mm) output conection for an expression pedal allowing you to control the speed with your foot (Expression Pedal NOT included). It also features 2 footswitches: one of them activates the effect for True Bypass, the other one switch is the CANCEL function that allows you to use the pedal as a Pre-Amp or like the original Uni-Vibe effect sounds…, this means that you turn off the lamp bulb keeping a high impedance in the photocells that gives to the sound a wonderful Pre-Amp like Original Uni-Vibe’s did in the foot control pedal with the tact switch. It has a hand painted soft switch with airbrush and enamel paint lacquered with gloss lacquer for a longer durability of the paint.

The RED/WHITE soft Rocker Switch is for you to set the modes, when RED POSITION is DOWN activates the “CHORUS” MODE and when the WHITE POSITION IS DOWN you are in “VIBRATO” MODE.

The SABBADIUS WOODSTOCK Funky-Vibe has a built in transformer inside the enclosure like the Original Uni-Vibe has with the correct power and voltage to get best performance and has the cable cord from the unit to conect to the wall.

The pedal has a Fuse socket with a fuse inside that is there to protect the circuit in case there is an overload on the voltage. The unit comes with one fuse inside and one outside as a backup, also comes with 2pcs. 2sC828 transistors for backup too.

* Red LED that pulse in the same way the Lamp Bulb interact inside the unit so you can “see the SPEED” of the effect.

* Speed: sets the effect’s speed in either mode.

* CANCEL Footswitch: activates the lamp Bulb to swirl the effect or turn off the lamp to use as a Pre-Amp like original Uni-Vibe’s does.

* POWER SW. ON/OFF: Allows the current to flow into the circuit.

* Fuse socket with a fuse inside that is there to protect the circuit in case there is an overload on the voltage. The unit comes with 2 Fuses, one fuse inside the socket and one outside as a backup.