The look of Beetronics FX’s pedals made me think of a conversation I had years ago with a friend who was scandalized at the fact that there was a factory whose sole purpose was to wear down new pairs of jeans and make holes in them so that they looked “cooler.” At the time, I was recording bands, and I told him: “Actually, that’s pretty much what I’m trying to do when I produce a band: I try to add character to their songs so that they sound cooler.”

Like those jeans, the pedals (hand) made by the guys at Beetronics FX look worn when new, but most importantly, they aim at adding character to your guitar tone.

The California based manufacturer presents itself as a “a family business formed by a guitar player, a drummer, a journalist, an architect and a dog,” which (apart from the drummer) represents an excellent mix of talents to run a stompbox company. We can certainly see the architect’s touch in these unit’s appearances, and perhaps also in the choice of the the super-intriguing hexagonal beehive theme, which marries the antithetical concepts of organic and scientific, fluid and geometrical, natural and intentional.

Not to mention this, which is a mind blowing touch!

For now, the company is offering three gain circuits (two octave fuzz and one overdrive), whose look can then be then customized using this online form. As you can imagine, these effects aren’t exactly the most transparent things you’ve put your tone through. But hey, you asked for character, not a new pair of jeans!

Find out more about the Beetronics FX pedals in the gallery below or on Beetronics’ website. 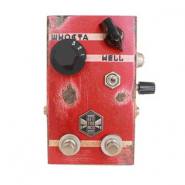 Beetronics FX WhoctaHell - $230
Low Octave Fuzz, with fully independent controls for the fuzz and the octave. It’s a overdrive/fuzz summed up with a gnarly squared wave low octave, resembling a 8-bit bass synthesizer. Its octave has a range of one or two low octaves, selectable by a toggle switch and also has it's own separate bypass switch.
1st tap: info, 2nd tap: video
Ebay 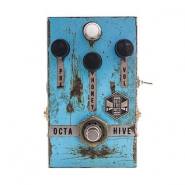 Beetronics FX OctaHive - $230
A super high gain fuzz with a well pronounced high pitch octave. The octave can be turned off by the toggle switch, turning it into a warmer and thicker fuzz pedal. Great for high gain leads, specially when played above the 12th fret. At low gain settings it can produce "ring modulator" overtones.
1st tap: info, 2nd tap: video
Ebay 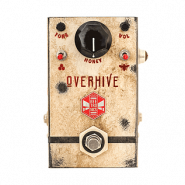 Beetronics FX OverHive - $230
A versatile medium gain overdrive, with a round and warm tone that respects your amp. The controls give you nearly infinite possibilities. The "Body" switch is adds a low end boost, the "Hive" switch can make you sound bigger and fatter, or tighter and thinner. The "Honey" control just adds the drive.
1st tap: info, 2nd tap: video
Ebay