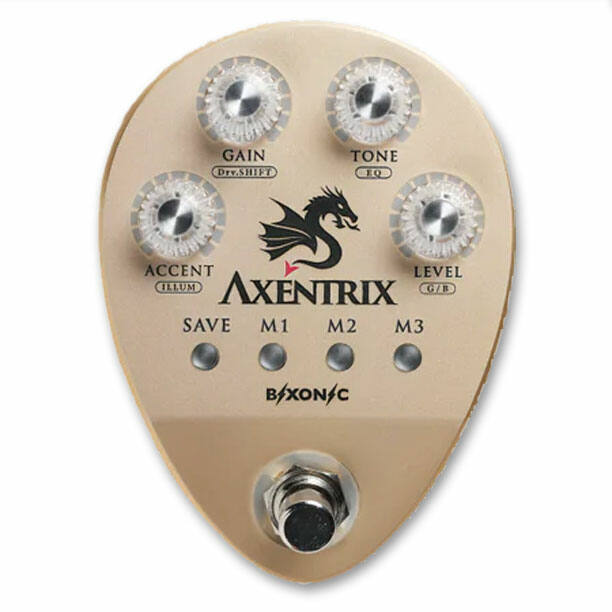 Released as part of the relaunch of the Japanese Bixonic brand (creator of the cult pedal Expandora), the Axentrix A1 is a digital gain pedal with a series of innovative features that can deliver the entire spectrum of saturated tones, including fuzz.

The fully analog Expandora, released in the mid ’90s, was one of the first gain pedal able to deliver overdrive, distortion and fuzz tones in one box, and the Axentrix can be seen as a digital evolution of that circuit, with an added 3- Preset system.

It offers four modes: Crunch, Overdrive, Distortion, and Fuzz, accessible by tapping on the Gain knob, which will change the color of the knobs’ lights according to the mode.

The resulting sound can be instantly tweaked using 4 knobs: Level, Gain, Tone, and Accent. The latter is a control that directly links this pedal to the Expandora, applying that circuit’s voice and dynamics to your tone.

This is how the manufacturer explained this control when we inquired vial email:

If you turn this knob to the right, you get an Expander Effect.

It is a digitized version of the expansion circuit (analog circuit using a photocoupler) that originally characterized the sound of the old Expandora. Plucking a guitar string hard produces a louder sound, and plucking it softly produces a softer sound. The strength and weakness (nuances) of the sound will be sharpened, and the power of expression will increase. In addition, the volume can be lowered simply by adjusting the volume knob on the guitar, making it easier to use the volume knob to add expressiveness to the melody by varying the volume.

Meanwhile, if you turn this knob to the left, you get a Compressor Effect.

On top of all this, the Axentrix’s digital circuit allows it to feature a string of useful controls accessible by tapping on the single knobs.

Check out the first videos of the Bixonic Axentrix A1, below.