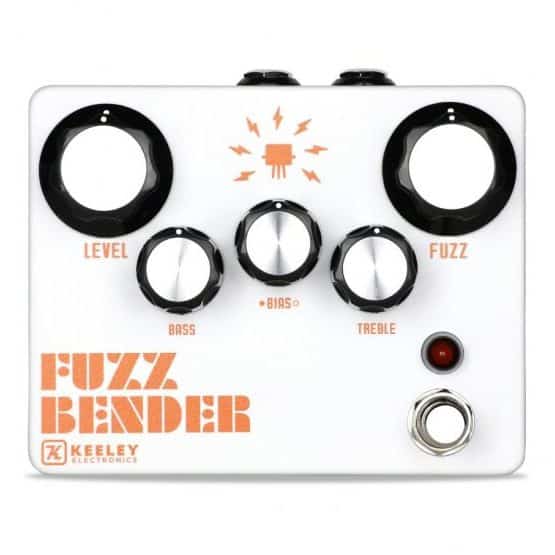 One of four new pedals Keeley presented at NAMM 2019, the Fuzz Bender was probably the most hyped of the bunch – at least according to our readers, since it placed 11th in our poll about the best stompboxes of 2019.

It’s a three-transistor hybrid fuzz utilizing the higher gain of silicon and the warmer sound of germanium circuitry. It has an active EQ with a massive 20dB of boost or cut available for the highs and lows, for truly extreme tone shaping. The Bias control is the most unique part of the design, giving you access to glitchy, dying-batter sounds by altering the fuzz’s attack and decay.

Here are some demos of it.

The Keeley Fuzz Bender is a 5 knob – 3 transistor modern fuzz using a combination of high-gain silicon and silky smooth germanium.  What makes fuzz better?  Active EQ.  Using two gyrators as an active EQ gives you the ability to create massive fuzz tones not possible with typical square-wave boxes.  Pummel your amp with over 20dB of boost/cut at 100Hz and 10K Hz.  The Fuzz Bender is built around vintage Japanese germanium to create its monumental fuzz tones.  With the all new Bias Control, you control the attack and decay of your notes.  Anything from Fat Square Waves to Angular Fuzz to glitchy-Velcro attacks are possible with the Bias Control.  The Fuzz Bender’s five knobs confirm size matters when creating a new and epic world of fuzz.