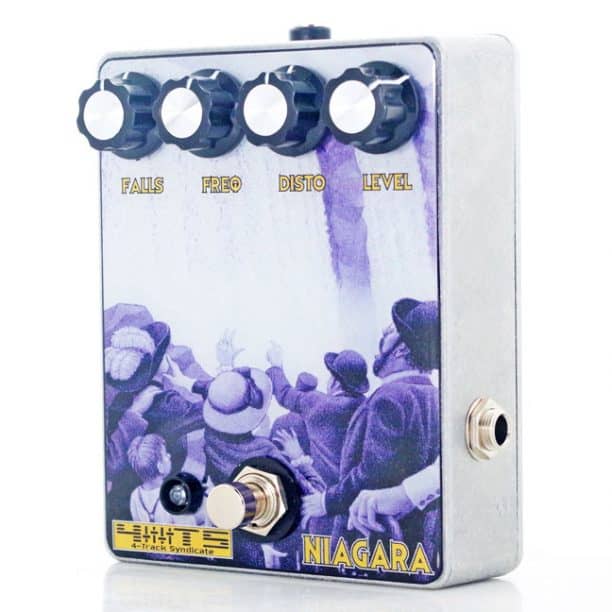 The 4 Track Syndicate Niagara, the fruit of a collaboration between Rare Buzz Effects, SoundsliceFX and Shoneswood Effects, is presented as a “Bitstortion,” i.e. a bit crusher / distortion combo.

While the controls for the overdrive (on the top right of the pedal) as pretty straightforward, the two knobs for the bit reduction have names that might be confusing to some: The Falls knob controls the rate of the Bit Crusher’s oscillation, with higher settings delivering more crushed results, with lower settings creating an effect similar to ring modulator, where the oscillation ends up creating an underlying note that can be tuned to the song’s key.

The Freq knob acts as a “mix” control for the amount of bit crushed tone vs clean signal fed into the overdrive circuit.

Check out the crazy sounds of the Niagara in the video below.

Pre-Sale Information: The first run of the Niagara Bitstortion is available for pre-sale on February 14th, 2020. Pre-sale units are expected to ship from Soundslice Fx in mid-March.

The Niagara Bitstortion: The Niagara features two effects in one – analog bit crushing and a classic distortion – run in parallel for an indirectly adjustable mix. Each effect has its own controls, and the pedal has a final passive volume control. Mixed together, the Niagara gives a gnarly rip to traditional distortion sound, and there’s enough volume on tap to push your amp even further into breakup.

The Niagara Bitstortion is the first offering from the international collaboration known as the 4-Track Syndicate. With design input from Shoneswood, Soundslice Fx, and Rare Buzz Effects, and featuring premium components, once you try the Niagara, you’ll be making room on your gig board for sure!