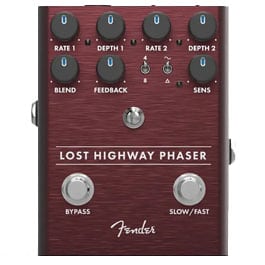 For Fender, NAMM 2019 was the year of modulation pedals: they unveiled three of them, all sharing a few features with each other.

Like a Rotary pedal, the Highway has two footswitchable speeds, each separately adjustable through separate rate and depth knobs. There are also controls for Blend, Feedback and Sens as well as switches for 4/8 phases and sine/triangle. 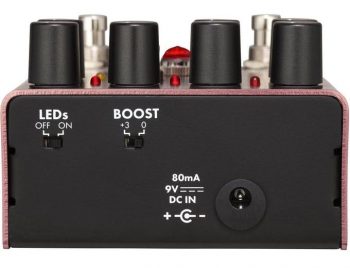 The back panel has  two switches: one allows you to turn off the led lights, the other boosts your signal 3 dbs – useful to compensate volume loss caused by the effect.

Here are some videos!

Made popular in the late-1960s and early 1970s, phasers create a sense of motion and add dimension to your sound. The Lost Highway Phaser brings powerful, flexible analog phasing to your rig. Foot-switchable Fast and Slow speeds each with their own independent Rate and Depth controls—let you easily alternate between slow, moody phase shifting all the way to rapid and warped modulation. The Wave toggle switch selects between Sine and Triangle waveforms while switchable 4 and 8-stage phasing makes it easy to add extra resonance on the fly. The Sensitivity control allows modulation rate changes based on your playing dynamics—dig in and the intensity of the phasing increases.

Designed by our in-house team of experts, the Lost Highway Phaser is an all-original Fender circuit. To ensure this pedal is performance- ready we let musicians kick it around, took their feedback to heart and refined it. The chassis is crafted from lightweight, durable anodized aluminum, and the Amp Jewel LED gives your pedalboard the classic Fender look. The LED-backlit knobs show your control settings on a dark stage at a glance.

Plug into the Lost Highway Phaser and add the swirling, pulsing sound of true analog phasing to your pedalboard.