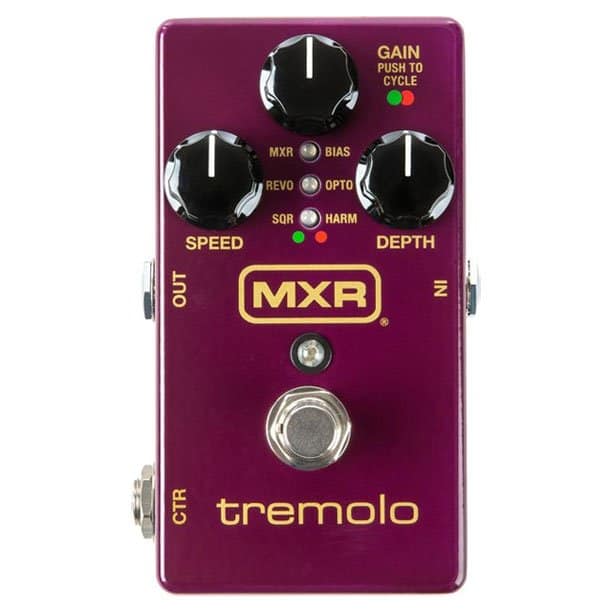 The MXR M305 is a brand new, rather simple multi-mode stereo tremolo with six algorithms and three knobs for Speed, Gain and Depth.

As usual with the Dunlop-owned pedal subsidiary, God is in the (tone) details of these six recreation of the various takes on tremolo, delivered in stereo through a single quarter inch jack.

The modes can be selected by pushing on the gain know.

The first mode is a in-house one, emulating the much beloved M159 MXR Stereo Tremolo. The Bias mode is inspired by the lush, power-soaked compression of tremolo effects that came equipped on early 1960s tube amplifiers. The Revo style turns the optical tremolo waveform backwards for more exaggerated peaks and valleys. In Opto mode you get that smooth pulsating tremolo generated by photocells as heard in many popular amplifiers. The SQR setting produces choppy, super pronounced tremolo with a square LFO wave, while the Harm style recreates the trippy, phase-like tremolo built into some rare vintage amps.

Check out the vidz!

This return of the tremolo effect to the MXR line combines a full historical range of masterfully tuned tremolo styles with a host of features to satisfy the performance needs of today’s discerning players.

Getting incredible sounds from the MXR Tremolo right out of the box is simple. Speed, Gain, and Depth controls set the rate, volume, and intensity of the selected tremolo effect, and cycling through the six styles is as simple as pushing the Gain knob. For advanced technicians of tone, a bevy of features await—from stereo operation to tap tempo and expression pedal functionality to envelope tremolo, which makes the response of the effect sensitive to your attack.

These and other features come in a single MXR housing so that you can put a wide variety of intriguing, well-crafted tremolo waveforms on your board with no overcrowding.