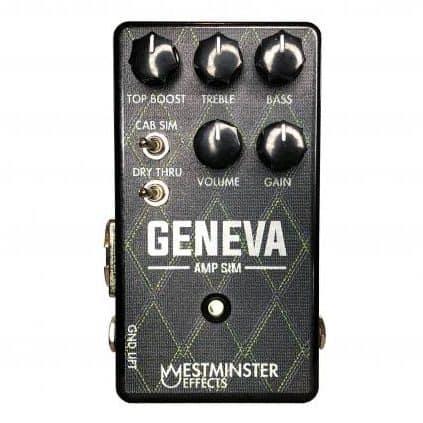 As its rhombic graphic pattern suggests, the Westminster Effects Geneva V2 encapsulates in a compact stompbox the tones of a classic Vox AC30 amp, including cab emulation, which can be turned on and off through a toggle switch – in off position, the Geneva works as a regular overdrive.

Just like the original, the pedal includes both a 1/4 and an XLR output, which makes it perfect as an analog option for running direct and an inexpensive option for running stereo. The new version is smaller than the original and includes a “Dry Thru” switch that allows you to route the clean signal through the 1/4 inch output, which allows for useful configurations both in the studio and on a stage.

The five knobs allow for a wide range of tones, with three EQ knobs (Bass, Treble and Top Boost, which adds presence) and two gain stages (one more than the amp it’s based on: Volume and Gain).

You can hear how this pedal sounds in Shnobel’s video below.

Whoever is not satisfied with their amp alone, may look to run direct. The Geneva Amp Sim V2 replicates the oft-sought after tones of the Vox AC30. It is usable as an overdrive, but it shines with its switchable cabinet simulator and XLR out, which makes it perfect as an analog option for running direct and an inexpensive option for running stereo. V2 also features a 1/4? output dry through, so you can bypass the Geneva at home, or run the Geneva’s XLR to the PA while you run the 1/4? output to an amp.