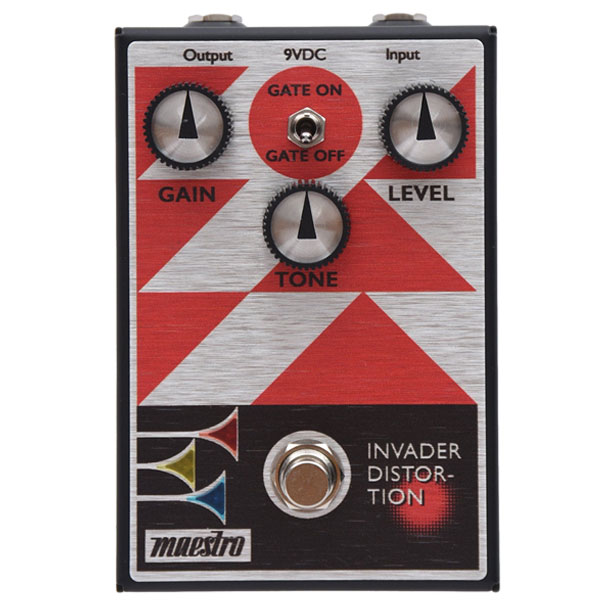 The Maestro Invader Distortion is one of the five pedals unveiled by Gibson in the relaunch of the legendary Maestro line. While some of the pedals in that group are at least in part inspired by circuits from the ’60s (like the FZ-M), the Invader appears to be its own thing: a modern high gain distortion.

With its simple 3-knob layout featuring controls for Gain, Level and Tone, the Invader provides an easy way to dial in a variety of usable tones at any setting, with an Output that can exceed unity gain if needed to give an extra push to your amp. And if things get a little noisy, there’s an optional noise gate toggle switch, whose threshold can be tweaked through an internal trim pot.

Hear the sound of the Maestro Invader Distortion in the demos below.

Invade and Dominate a World of Distortion

The Maestro Invader Distortion is a high-gain, all-analog modern distortion pedal with a heavy, aggressive, dominant sonic character and loads of rich harmonics. With the Maestro Invader Distortion, users can generate a wide range of distorted sounds. The 3-knob control layout gives users intuitive control over Gain (distortion amount), Tone, and output Level, with more than enough volume on tap to easily exceed unity gain when you want to. Users can also engage a built-in noise gate with the top panel toggle switch. An internal trim pot mounted on the circuit board inside the pedal allows the user to adjust the level of the noise gate’s Threshold. The true bypass footswitch triggers the LED lights in the bugles in the Maestro logo when it’s on, so you’ll always know when the effect is active.