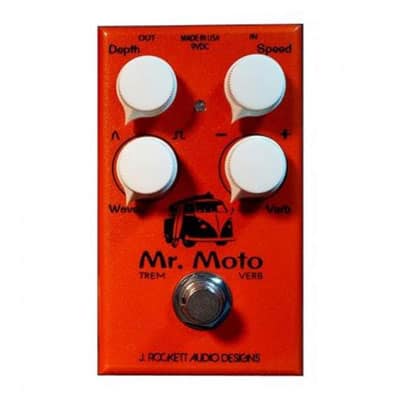 Featured in many vintage amps of the ’60s, tremolo and reverb were the very first mass-produced non-gain effects for electric guitar, and their combination, which became strictly tied to the sound of surf-rock, is still a favorite for many six-string players.

J. Rockett Audio Designs unveiled a new pedal that offers these two effects in one orange box, the Mr. Moto. As usual with the Nashville based manufacturer, focus is on tone, which is inspired by those incredibly musical circuits found in those early amps.

Mr. Moto offers three controls for the tremolo (Depth, Speed, and a knob that gradually changes the shape of the wave from sine to square), and just a volume control for the reverb, which sounds like a classic and lush spring you’d find in a vintage amp.

The footswitch features a proprietary system called Speedswitch that allows to quickly replace the part when it breaks (see bottom video).

A very musical Tremolo with a super lush spring reverb as well. Both can be run independently or together.
The Tremolo can go from a very subtle throb to a choppy rhythmic pulse.