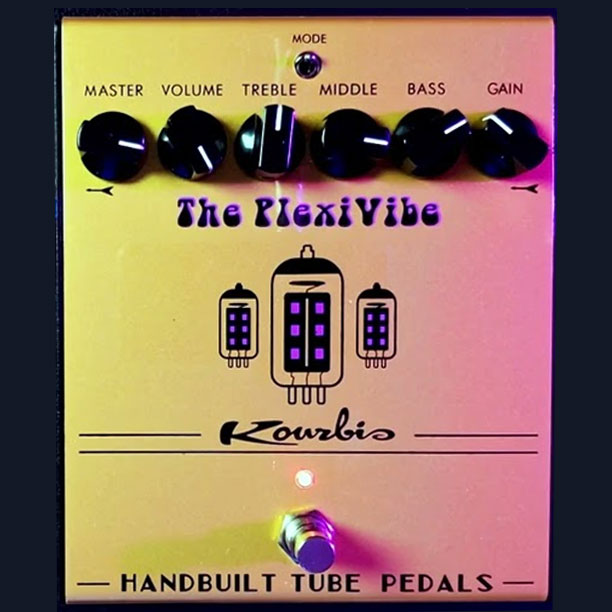 Marshall-inspired pedals are still among the all-time favorite of rock guitarist, and the Kourbis Plexivibe, hailing from Greece, is a solid, hand-built take on the format, featuring two 12AX7 tubes inside the case, and vintage NOS materials as a true Marshall amp.

The PlexiVibe has three modes, accessible through a toggle switch on the top of the 6 amp-style knobs, that deliver a variation in gain, compression and overall flavor.

On the side of the case, a 2-way switch provides a mid-boost voicing or extra compression.

Here’s the video of it.

PlexiVibe is an all tube hand built Overdrive/Distortion pre-amp in pedal format. Despite its relatively small size, it achieves, versatility and various tone options, being constructed with 2 12AX7 tubes.

PlexiVibe is not an attempt at MIAB, it is the real McCoy, producing sounds and tones reminiscent of the “golden era”of that British sound amplification.

Producing easily the most sort after classic rock and hard rock sounds from the 60`s to early 80`s, The PlexiVibe will become your new best friend.

BASS – Controls the bottom end in your tone by adjusting the low frequencies.

TREBLE – Controls the high frequencies, making your tone brighter as you increase it.

VOLUME – In conjunction with the gain control a variety of sounds can be achieved.