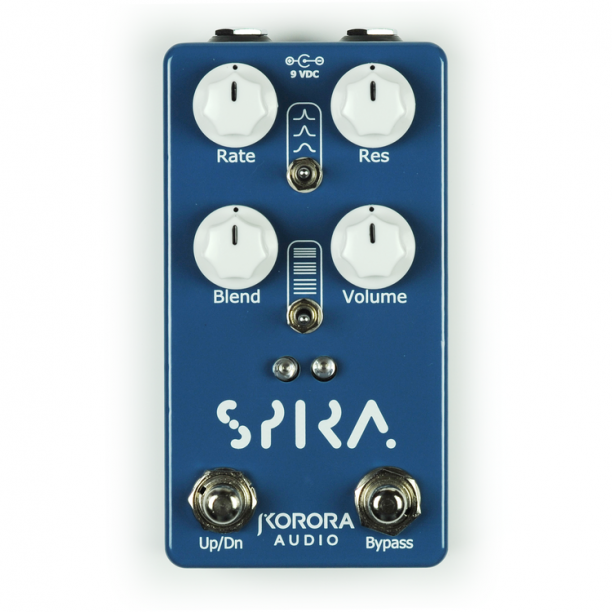 A unique pedal inspired by a rather obscure sonic phenomenon investigated by Roger Shepard in 1964 (hence called the Shepard Tone), the Spira is the debut stompbox by Seattle-based builder Korora Audio.

The effect is a filter modulation pedal that “uses a bank of resonant bandpass filters to create the illusion of a never-ending, layered, overlapping glissando.” The filters in question are spaced one octave apart from each other and sweep through the audio spectrum “at a constant rate per octave of sweep.”

The left footswitch allows you to change the direction of the sweep, while two toggle switches lets you modify the shape of the resonant EQ curve and the density of the sweeps. Four knobs allow you to control Rate, Resolution, Blend and Volume.

For the technically savy, the manufacturer explains in this blog posts how this stompbox differs from other filter modulation pedals.

But for all those who want to know how the Spira sounds, here’s the video demos of it:

Inspired by the Shepard Tone first described by Roger Shepard in 1964, Spira uses a bank of resonant bandpass filters to create the illusion of a never-ending, layered, overlapping glissando. The glissando effect is produced using the resonance of the filters, and can be applied to any instrument.

Spira sounds as if it is continually and infinitely sweeping either up or down, creating musical tension and energy. Its texture and sweeping motion are perfect for psychedelic, drone, and ambient styles, and anywhere else you want to add movement to your sound.

Up to 24 parallel high-performance resonant filters
A high performance parallel resonant filter bank is at the heart of Spira. Spira’s filters can be selected to operate at 6, 12, or 18 dB per octave and the Q factor can be set from flat to near oscillation.

Selectable density
Set Spira’s filters for an octave spacing to get the classic Shepard effect. Set the filters for tritone spacing to double the density, or select the middle mode of alternating octave and tritone intervals for a spacy and unique effect.

Control the rate of the sweep from glacially slow through tremolo range
When turned fully to the left, the filter sweep freezes, producing an effect similar to a comb filter or formant filter. Turn it up a bit and the classic, slow sweeping Shepard effect is produced. As you go further clockwise, a warbling tremolo effect is produced.

Sweep up or sweep down
The illusion of the filters infinitely moving in one direction can create a strong tension and mood. Reversing the direction from sweeping up or down offers even more control over the sound, and can have an impact at all settings of the rate control.