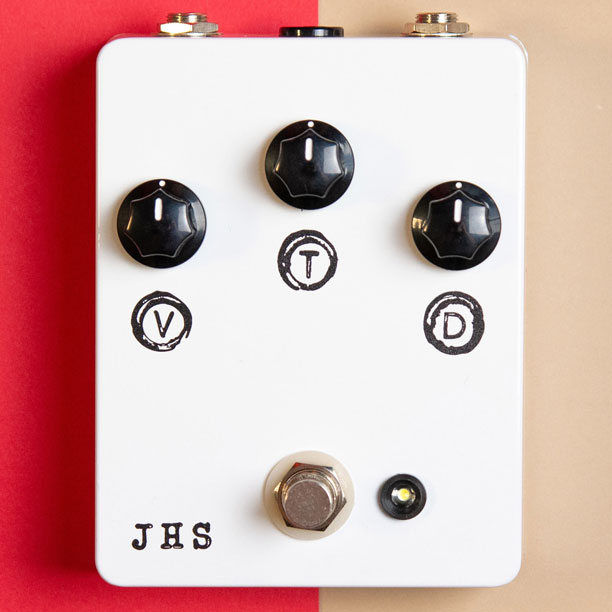 Reverb.com and JHS Pedals just announced a limited edition version of the Bluesbreaker-inspired JHS Morning Glory Overdrive (you can buy it here), a pedal so dear to Josh H. Scott that he dedicated an entire episode of the company’s YouTube show to it (streaming below). The release is linked to the unveiling of the online store’s unveiling of The Pedal Movie.

This limited edition, printed in 300 copies, is a reprint of the first version of this pedal, of which apparently there are only 100 or so copies selling now for an arm and a leg on the used market.

The unit is wider than the original and doesn’t feature the Gain toggle present in the Morning Glory V4 (which is a lto more affordable). In all likelihood, it also has less headroom since V4 runs internally at 18v, but it may still have an irresistible pull on pedal collectors due to its limited availability.

Josh H Scott wrote a note about this release, you’ll find it at the bottom of this post.

The JHS Morning Glory Throwback can be purchased here for $299.

In 2006, John Mayer released his album Continuum. This record made me love the guitar in a brand new way. I had never heard such perfectly clean yet delightfully dirty tones; it fascinated me. After digging up information on his rig for this record, I learned that John had used an original 1991 black-box Marshall Bluesbreaker pedal.

I jumped on FleaBay and, within a few weeks, I had a Bluesbreaker on my board and was head-over-heels in love. A year later, I fixed a broken guitar pedal and started modifying BOSS gear; this was the early incarnation JHS Pedals, just called JHS Mods at the time. The first pedals that I modified were mostly mainstream effects– because if you’re going to accidentally destroy a pedal, make it replaceable — but in 2008 I couldn’t resist modding my rare and out-of-production Bluesbreaker to be more powerful and less harsh with certain single-coil pickups. These modifications (and a few other changes) lived secretly on my board for another year.

By this time, I had built a few pedals from scratch, and began to brainstorm how I could create my own original pedals instead of just offering mods. I felt a little bit like Dr. Frankenstein when he actually succeeds in bringing the monster to life; I’d accidentally started a pedal business with no idea where things were headed.

One of the first original designs that I built to sell as a JHS Pedal was the Morning Glory overdrive. It was the original 1991 Bluesbreaker circuit with all of my changes, built from the ground up, set in a white enclosure (bigger than the current models) and hand-stamped by me. Early versions didn’t include the iconic firework symbol, and I only made around one hundred of these V1s; they are impossible to find now. The Morning Glory name was a reference to a type of firework (a roman candle that I played with as a kid), and I liked the comparison. I felt like the Bluesbreaker circuit added the clarity and rounded brightness that was always missing in my sound.

I would have never dreamed that this simple design would change my life– and, more importantly, the lives of so many employees and families here at JHS. Since 2009 we have sold more than twenty thousand Morning Glory overdrives. JHS would be nothing without it.

This is the only pedal that has never left my personal board, and I doubt it ever will. Thanks for buying this limited replication of a pedal that means a lot to us here at JHS. I hope you enjoy it for years to come!