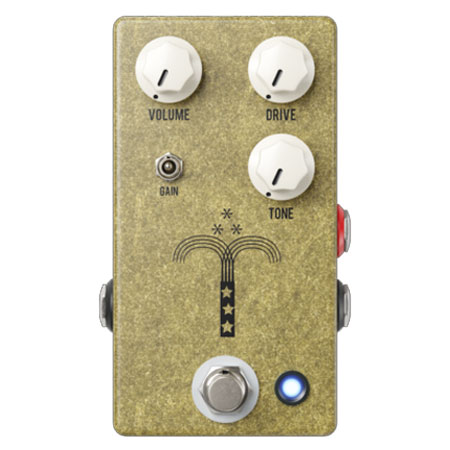 The pedal that put the Kansas City builder on the map, the JHS Morning Glory has probably become more famous than the pedal it’s inspired by: the Marshall Blues Breaker – maybe even more popular than the legendary Analogman King of Tone, another Blues Breaker variant.

This type of overdrive adds dirt to your signal without altering your guitar’s fundamental character – aka, it’s transparent – with the Drive knob slightly increasing the highs when turned up.

Company owner Josh Scott popularized the idea of adding a JFET output gain stage to the Blues Breaker circuit to bump up the volume available. The V4 Morning Glory includes extra features such as a higher headroom, Gain toggle, and a bright-cut switch.

The JHS Morning Glory is on top of our article about the best Blues Breaker clones and variants.

TRULY TRANSPARENT TONE
The best way to explain the Morning Glory is that it delivers all the tonal and responsive nuance that your amp is missing, and nothing that your tone already has. It’s difficult describing a pedal that can be set to have little effect on your tone, so just plug into our Morning Glory overdrive for yourself, and then you’ll understand.

– Increased headroom and output for use as a full-frequency boost

ON-THE-FLY VERSATILITY
An update for the Morning Glory V4 is moving the original’s front-mounted bright-cut switch to the side of the pedal and replacing it with a powerful boost circuit. And by pairing your Morning Glory V4 with the JHS Red Remote (sold separately), you’re able to access the boost mid-song. It’s like having two Morning Glorys in one pedalboard-friendly package.

– Handy LED changes from blue to red, indicating the status of the boost circuit