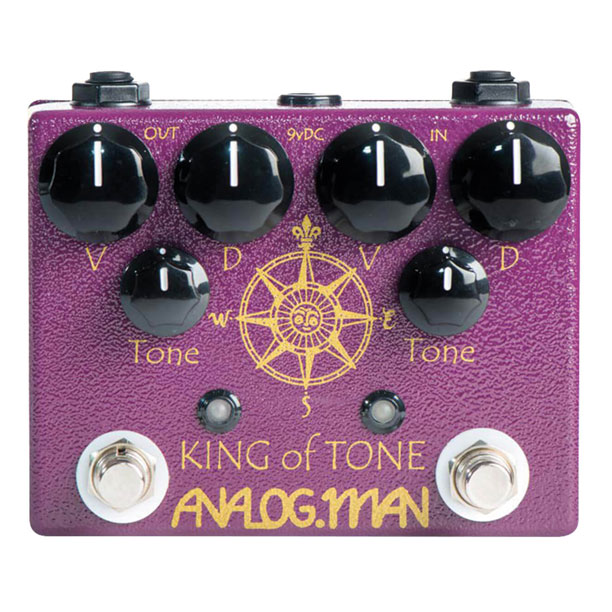 In a market (the pedal one) where more and more companies seem to focus exclusively on growth and margins while giving up craftmanship for industrial assembly and replacing real-life connection with YouTube videos, it’s refreshing to know that there are still a helluva lot of guitarists who value what companies like Analogman do, with their artisanal approach to pedal making.

The Pace of Craftmanship

Jackson at Dipswitch Demos (whose video we are pasting below) waited almost FOUR years to get his hand-made Analogman King of Tone, and that means at least two things:

They’d rather proceed at their own pace, building pedals by hand, and with hands they trust, and have a personal relationship with each of their customers: “We like to treat each customer as a prospective friend. I now have friends all over the world with the common interest of vintage guitars and effects.” says owner Mike Piera on the company’s site.

Indeed, that’s one of the reasons why Analogman is nothing short of legendary in the pedal world.

A Brief History of the King of Tone

For the unaware, the company was among the first boutique pedal builders to appear in the mid ’80s, and the King of Tone overdrive is one of their most sought-after pedals, selling on the used market for two or three times its original price. Launched in the early aughts, the pedal pioneered the dual drive format that became increasingly popular year after year.

The original circuit was a heavily modded Blues Breaker circuit (so much so that at the end it didn’t sound anything like that vintage circuit). It was designed with the goal of taking “an amp at reasonable settings, and make it sound like it would sound if it were naturally driven to pure, smooth, tube distortion,” but it was meant to sound less compressed, distorted, and colored than a Tubescreamer, which was all the rage those years (and still is to this day).

Great Tone and Tweakability Ahead of its Time

Mike Piera describes the King of Tone as a pedal with “enough warm overdrive but [that] still preserves the tones of your quality guitars and amps,” and there’s no need to stress that a lot of electric guitarists seem to really like its sound. But there’s a lot more to it than tone.

The two overdrives are separate, identical circuits that can be played independently or stacked on top of each other, and 4 internal DIP switches allow the player to change each side’s voicing to sound clean, overdriven or distorted. The fourth switch turns on a treble boost tailored to brighten up darker amps.

On top of that, the pedal can run at 9v or at 18v, which makes it a lot more dynamic thanks to the increased headroom allowed by the higher voltage.

This kind of tweakability in the early aughts was unheard of, but the pedal couldn’t have maintained its legendary status if it didn’t sound anything short of great to many ears.

You can listen to it and judge for yourself in the videos below.