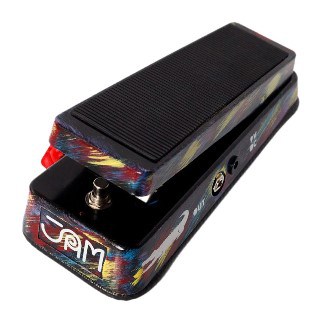 The Jam Pedals Wahcko is a high-end, tension adjustable, Fasel-based wah offering a 6-position rotary switch for 6 different frequency sweep ranges and an internal trimmer for adjusting the input gain. There’s also an optional Seagull effect that can be requested when ordered.

We added it to our article about the best Wah pedals.

After years of appearing as a mainstay on many pros’ boards and earning its fair share of praise and awards, the Wahcko has established itself as the most vocal, expressive and at the same time versatile wah pedal out there.

The Wahcko features a bufferless proprietary circuit design that allows for impedance sensitive pedals, like germanium fuzz boxes to be placed after the Wahcko with no issues!

SEAGULL: the seagull effect heard in Pink Floyd’s “Echoes” !
POINT TO POINT: You can order the Point-to-Point version of the Wahcko which features tropical fish capacitors and 0.5 Watt carbon comp resistors.

1. Use your Wahcko as a tone-shaping tool. Turn the Wahcko+ on, leave it at the toe-down position and experiment with the 6 different settings of the rotary switch. We bet you can find many interesting tones for your lead or rhythm overdriven parts

2. (For Seagull version only) To properly operate the Seagull effect: –Make sure your guitar has passive pickups.
–Engage the effect with the toggle-switch.
–Turn your guitar’s volume knob all the way up.
–Change the effect’s pitch by manipulating your guitar’s tone pot.

“I’m a mad user of JAM pedals! I probably have more Wahckos than anybody in the world! The reason I use Wahckos is because of expression. The moment I played a Wahcko, the type of expression was undeniable. It was so human-like in a way that it just touched my soul.” Nile Rodgers

“I love the sweep of the Wahcko, very vocal like and sweet! What a fantastic wah!” Steve Lukather

“The Wahcko is fantastic! Now I finally have a great wah-wah pedal!” Bill Frisell

“JAM pedals make the best wah pedal of all time as far as I’m concerned. It has more dexterity than anything else. Best wah-wah I’ve ever had and I’ve had a bunch of them!” Richie Sambora

“The Wahcko is amazing. Ive never actually owned a wah before because I always found them a bit underwhelming but this is very grimey and musical!” Ruban Nielson

“I absolutely love it! Beautiful job! Every setting on the switch sounds great and the vocal sweep is perfect. Finally, finally, after all of these years a wah I will actually use and not want to sell or destroy!” Julien Kasper

“The Wahcko exhibits a rugged, broken – in maturity. It sounds like a sweet old wah with lots of miles on it and provides superb tone-sculpting choices for clean and distorted amps!” Vintage Guitar magazine

“One of the best of its breed” GUITARIST magazine

“Love the smooth action of the pedal and how you can change its voice to accentuate your guitar’s natural tone.”Sean Ono Lennon