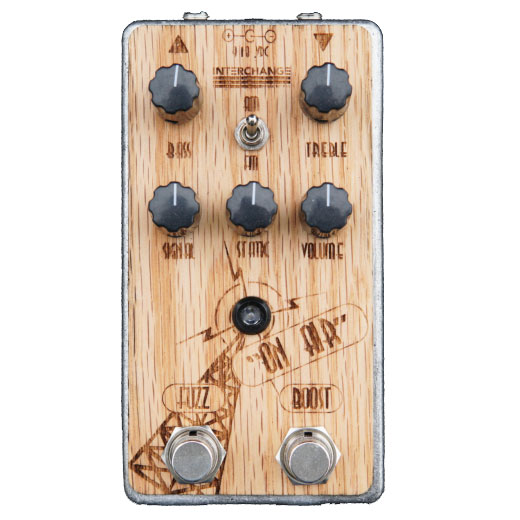 Based out of Nashville, TN, Interchange Noise Works (previously known as Runaway Audio) is a boutique pedal builder currently run by students. Their flagship pedal, the On Air, is a tweakable fuzz with an added, switchable boost.

The fuzz is an evolution of the bazz fuss style circuit, a gnarly one-transistor fuzz, and features independent Bass and Treble knobs.

The Static knob for gain while the Signal knob allows you to adjust the output volume of the fuzz – not to be confused with the Volume one, which sets the amount of boost, which is placed after the fuzz circuit and can be used as an entirely separate effect..

Here are the videos of the Interchange Noise Works On Air.

The “On Air” is lovingly named after the ‘fuzz-like’ radio static that occurs between stations on your radio. Our beloved 2 in 1 fuzz and boost pedal is a fan favorite because its versatility and wide range of tone shaping options that allows the artist to dial in his or her perfect style of grit.

The fuzz portion of this pedal is our interpretation of a bazz fuss style circuit. Independent bass and treble knobs allow you to shape the range of frequencies you would like this pedal to interact with. The static knob is classic gain sweep and the signal knob allows you to adjust the output volume. Lastly, the AM/FM switch allows for two different biasing options that offer a smoother and a harsher fuzz tone.

The boost portion of this pedal runs after the fuzz circuit and can be used as an independent boost or stacked together with the fuzz. A single volume knob allows you to adjust the output level of the boost circuit.

The “On Air” features top mounted jacks and runs on 9-18 volts standard DC.