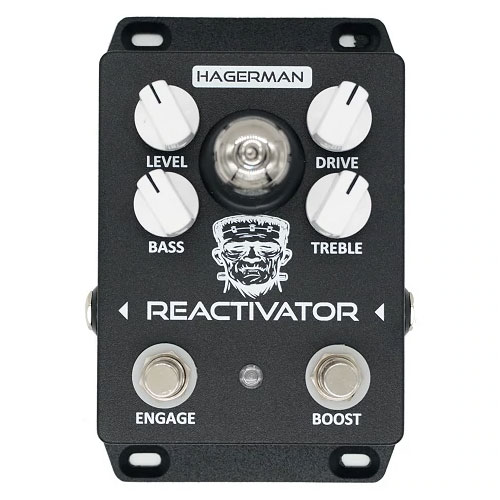 Hagerman is a small American boutique pedal builder dedicated to manufacturing amps and pedals, and the Reactivator belongs to a series of stompboxes featuring an actual tube in the circuit – in this case, a 12AU7.

A two-transistor / two-triode overdrive, the Reactivator is a development of the company’s Valve mini-boost, its starved tube section being fed by a clean gain boost and followed by a tonestack with output buffer. The tube is actually fed a 12V power – instead of 6v – for higher performance.

A separate Boost footswitch pushes extra gain into your amp when neded, while Bass and Treble knob allow for basic tone sculpting.

Here are the videos of the Hagerman Reactivator Tube Overdrive.

REACTIVATOR is a two-transistor / two-triode overdrive that runs the gamut from tonal warmth to growling distortion. This pedal employs the starved tube section from my VALVE pedal, preceded by a clean gain boost, and followed by a tonestack with output buffer. Such a topology offers up tube saturation and a variety of sonic flavors. If you thought the Butler (Chandler) Tube Driver or Klon Centaur were good, wait until you hear this!

During the early days of TV, if a picture tube grew dim, servicemen could perform a trick called “reactivation”, where heater voltage was overdriven to the point of regenerating a poisoned cathode, thus restoring brightness. That’s where the name of this pedal comes from! Increasing power from 9V to 12V adds another 6dB of gain for even higher performance. It may not reanimate dead tissue, but it will breathe new life into your guitar. This pedal is absolute magic.