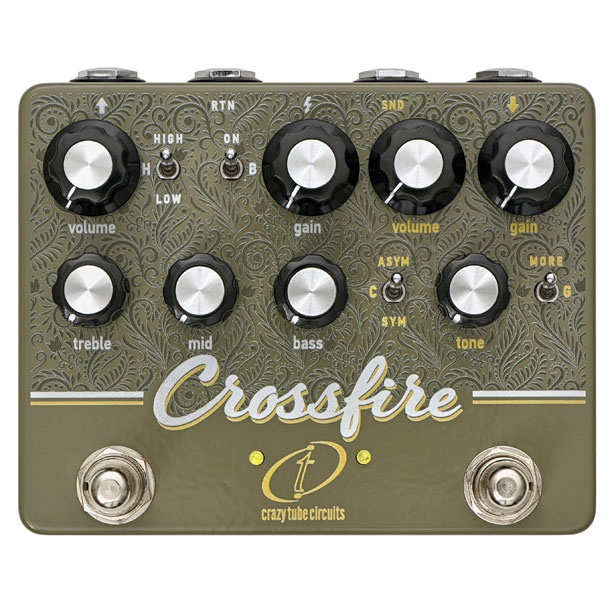 Fender “Black Panel” or “Blackface” amps were made in the mid-’60s and came to define the sound of a blues guitar legend: Steve Ray Vaughan. The Ibanez Tube Screamer, on the other hand, is – simply put – the most popular overdrive pedal ever made. This overdrive/amp combo (in that order!) has become somewhat iconic in rock’n’roll music, and Crazy Tube Circuits Crossfire is a pedal that puts that combo tone at the tip of your toes.

The pedal is organized in two halves: Blackface-style amp-in-a-box on the left side (controls with white font) and TS-style drive on the right, each with its own footswitch (controls with yellow font).

Each side features expected controls (both have Volume and Gain, the Blackface side has a 3-knob EQ section while the TS side has a just Tone knob), and a series of toggle switches that broaden the sonic and dynamic palette.

The High/Low toggle controls the headroom of the Blackface side, delivering a more or less dynamic/compressed/airy sound, which reminds us that this pedal works internally at 18v so it can deliver a lot of headroom. The B toggle is a brightness switch.

The left side features a couple of popular mods to the Tube Screamer circuit with the C toggle offering two clipping modes (symmetrical and asymmetrical) and the G toggle delivering more gain on tap.

The effect loop is a useful touch for those who like to have other effects between their overdrive and amp(-in-a-box).

Hear the sound of the Crazy Tube Circuits Crossfire Overdrive in the videos below.

Crossfire is inspired by one of the most iconic pedal – amp combinations in guitar history.

The left side is voiced after the blackface amps that defined clean electric guitar sounds. Following the circuit path to the exact detail we managed to include all the essential sonic ingredients. From the big bold lows, sparkly highs and slightly scooped mids, to the powerful sound of a solid state rectified 4x 6L6GC power amp or the sponginess of a tube rectified 2x 6L6GC power amp selectable through the headroom switch.

Match that to the green mid-hump overdrive we’ve all grown to love, upon its inception in the late 70s, found on the right side. We chose to accurately recreate the circuit of this classic overdrive but with the addition of some of the most common modifications the pedal has seen throughout the years of its mass production or boutique variations. A clipping toggle switch selects between symmetrical (original) or asymmetrical clipping for enhanced touch-sensitive drive characteristics while a gain toggle adds more gain and alters the low frequency response making it reminiscent of placing two of the same overdrive pedals in series. An internal switch offers additional headroom by providing 18V DC to the overdrive circuit.

Warning: This unit was designed for 9V DC input only. Do not use a higher voltage power supply.

A passive effects loop gives you the option to connect your beloved pedals in the signal chain building your ideal rig or use the two sides independently (send is the output of the overdrive side, return is the input of the amp side). When both sides are in bypass mode the loop is true bypass as well, so your signal won’t be affected at all.

It’s a match made in heaven! Turn your rig into a screaming sparkly blackface machine!