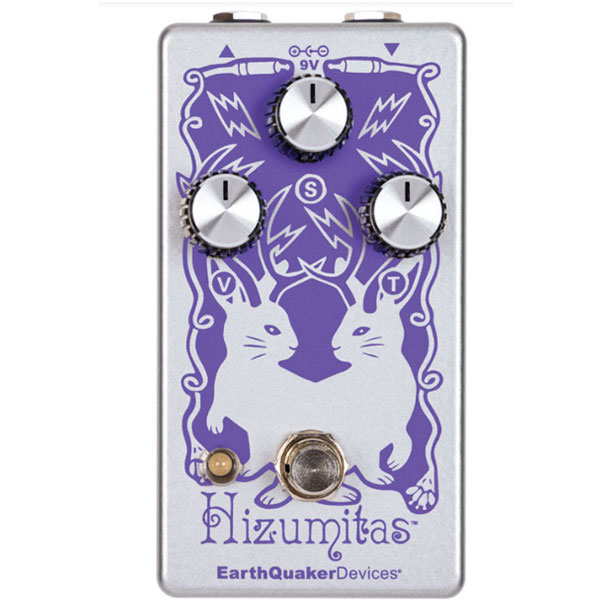 EarthQuaker Devices is back at it with a new fuzz designed in collaboration with Wata, guitarist of the cult Japanese experimental band Boris. The pedal, called Hizumitas, is a recreation of Wata’s favorite distortion pedal, the Elk BM Sustainar, a Japanese variant of the “Triangle” Big Muff Pi.

The EQD team was actually sent the original pedal by Wata, and was able to box its peculiar tone in the new device: a “heavy saturation with a gritty edge and massive bottom” – while maintaining a clear and dynamic tone with enough mids and top end to cut through any sludge.

The 3-knob device was optimized to work seamlessly with different pickup types and playing dynamics and offers a wide sonic palette thanks to a Sustain control offering a wide range of saturation and a Tone knob that can heavily affect the quality of the distortion.

You can hear the sound of the EarthQuaker Devices Hizumitas in the videos below.

Hizumitas was designed for the one and only Wata from the legendary experimental band Boris, one of the heaviest bands ever to come out of Japan. The trio of guitar sorceress Wata, drummer and vocalist Atsuo, and double-neck bassist, guitarist and vocalist Takeshi has almost 100 releases filled with genre and brain-melting music.

Wata, always seen and heard on stage wielding her black Les Paul Custom, mixes killer riffs with searing, fluid, or jaggedly melodic leads and controlled walls of feedback, often with help from an EBow. It’s a connection of chaos and melody that has enchanted Boris fans worldwide and influenced many bands that have followed in their considerable wake. Simply stated, no other band sounds like Boris, and no other guitarist rocks like Wata.

Hizumitas is a faithful recreation of Wata’s go-to distortion pedal, the Elk BM Sustainar. The Elk is a Japanese variant of the very well-known “Triangle” BMP. The designers at EQD tried several vintage BMPs during development, found that each pedal was wildly different and realized that to truly capture the magic they needed the original. Wata graciously sent her beloved pedal halfway around the world, and EQD discovered that it had something special the others didn’t have: heavy saturation with a gritty edge and massive bottom while maintaining a clear and dynamic tone with enough mids and top end to cut through any sludge. The studious wizards at EQD have built all of those characteristics into the Hizumitas.

This fuzz/distortion brings loads of heavy distortion and smooth sustain and an underlying grit that sounds like the speakers are on the verge of ripping apart while delivering amazing and unexpected clarity from such an aggressive sounding pedal.

The Sustain control has a wide range of saturation, meaning even small changes will significantly affect the overall tone. Hizumitas responds excellently to all types of pickups and playing dynamics. Power chords will sound huge and heavy, while open chords will be dynamic with fantastic note separation, and single-note leads will come across smooth and powerful, especially with the neck pickup.

The Tone control can drastically change the character of the distortion in conjunction with the tone. Bass frequencies are boosted clockwise, and treble frequencies are boosted counter clockwise. The Tone control can go from an aggressive mid-range grind to piercing highs as you turn it counterclockwise. As you turn it clockwise, the mids become less present, the highs are tamed, and a humongous, thundering low end comes to the forefront. The Volume control offers massive output gain with unity at around 9-10 o’clock and beyond that, prepare to hear and feel the power of Hizumitas.

To commemorate this exciting collaboration, Boris and EarthQuaker Devices have teamed up with music gear marketplace Reverb.com to offer an exclusive Hiuzumitas Special Edition Bundle that will be available to order beginning Thursday, November 4. Purchasing the Reverb bundle gives Boris and EQD fans a full two weeks to rock out before the global release of the standard Hizumitas on Friday, November 19. The Reverb Special Edition Bundle, limited to just 500 units, includes a unique colorway of the Hizumitas featuring black print on a silver enclosure. (The standard Hizumitas features purple print on a silver enclosure). Bundle buyers also get a silk pedal bag, a poster autographed by Boris, and their new 12″ single, “Reincarnation Rose.” The limited-edition 12″ is an EarthQuaker Devices Records release on blood-red vinyl. Also, on Thursday, November 4, the “Reincarnation Rose” video will be released, and the song will be available to stream on Apple Music and Spotify.

The Hizumitas Special Edition Bundle will be available exclusively at Reverb.com, the largest online marketplace dedicated to buying and selling new, used, and vintage musical instruments.

About EarthQuaker Devices:
Akron, Ohio-based, hand-crafted effects pedal manufacturer EarthQuaker Devices, top-six in the U.S. and one of the top-10 in the world, create products that are available in over 865 retail locations in approximately 50 countries. Key retailers include Guitar Center, Sam Ash, Sweetwater and Thomann. The company’s current workforce includes over 50 individuals, and has been praised for its commitment to inclusion, diversity and cooperation with other pedal manufacturers by Best Guitar Effects.

About Reverb:
Reverb is the largest online marketplace dedicated to buying and selling new, used, and vintage musical instruments. Since launching in 2013, Reverb has grown into a vibrant community of buyers and sellers all over the world. By focusing on inspiring content, price transparency, musician-focused, eCommerce tools, a music-savvy customer service team, and more, Reverb has created an online destination where the global music community can connect over the perfect piece of music gear. Sales on Reverb also help support the Reverb Gives program, which provides youth music programs all over the world with the instruments they need to make music. Reverb is a wholly-owned subsidiary of Etsy (NASDAQ: ETSY), which operates two-sided online marketplaces that connect millions of passionate and creative buyers and sellers around the world.

And apologies to anyone directed to my blog from this article. While it may be an elk, I doubt you want to build one.