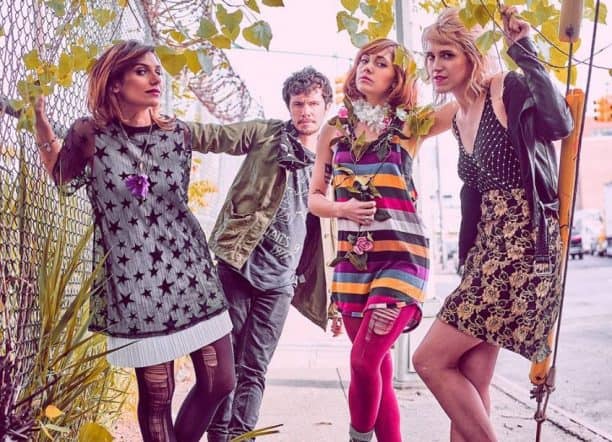 If you are feeling in the mood for surfy and grungey sonic fun, we’ve got a band for ya: they are called Fruit & Flowers and they hail from Brooklyn, NY. The four-piece is technically skilled, with fast-paced and fleshed-out guitar parts (as heard in tracks like “Pick Fairy”) backed by a tight rhythm section, which too often is the missing link in emerging garagey bands. To top it all off, they layer dreaminess all over their tracks through lead vocalist Caroline’s saccharine soprano (and a fair amount of reverb, not too much though!). We heard the ladies dig guitar pedals, so we thought to ask them a few questions about them and other matters… – Lilly Milman

We would love to hear how you all found each other, what brought you to NYC, and how everyone ended up getting into music.

[Note from the the folks at The Deli] Admittedly, this was a naive question and we immediately fired the unpaid intern who asked it (we did the termintation Trump style, asking another intern to let the guy know about it). The band’s answer was so long we decided to create a separate page about it, here – you can also find their latest EP in its entirety there!

Was there a specific source of inspiration for the new album “Drug Tax?” 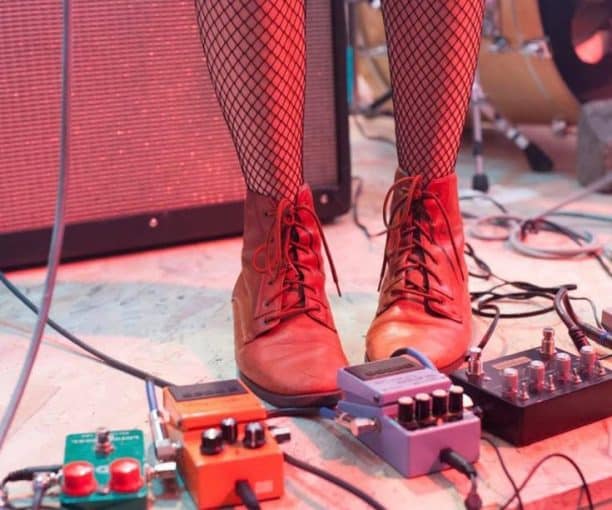 Ana: I think the rush of finding good songwriting partners fueled a lot of the inspiration. We all have big ears and listen to a lot of kinds of music, so there wouldn’t really be one specific sonic inspiration, rather the chemistry of our various influences and writing styles. And it’d be impossible not to be influenced by the whirlwind stress of trying to be creative and support ourselves in the city.

Caro: I blame Bauhaus and Fugazi for everything.  That’s a partial joke.  It’s really funny our music doesn’t sound like either of those bands.  I think everything from the Beatles to Motörhead have influenced this record.

Lyzi: I am constantly inspired by my relationships with others. Lyrically, that is a big part of it… and how much fuel I add to the flame of creativity. I was crawling out of quite a few abusive relationships at the time. In the beginning, it inhibited my creativity. I found a way to break out of the rut and felt stronger than ever. I was inspired to practice and become a better musician and person as a whole. I was (and still do) listening to Black Sabbath, Sonic Youth, The Beatles. I looked up to them for arrangement, melodies, harmonies, performance, etc.

Jose: By the time I joined the band most of these songs already existed. However, it was really fun being part of the evolution process the original ideas and the actual recordings. My main inspiration during those months was just wanting to play drums.

You just dropped the new LP on June 30th, which happens to be almost 2 years after your first Bandcamp single “Turquoise.” How would you say your sound has evolved over the years? Have you found that there are certain things that are musically more (or less) important to you now than then?

Ana: It’s nice to have a body of work that’s available to listeners that represent us more fully than “Turquoise” does. It used to be that people would hear “Turquoise” online, and then come to one of our shows and be like “OH, this is pretty different.” Our live show has always been heavier, and more energetic. Rather than our sound evolving, I think it’s more that the available representation of our sound has become truer to our live performances.

Lyzi: Hmmm…that’s a tough question. I feel I’ve definitely evolved my sound and performance style. I have gained more skill and technique yet I’m looser on stage. I care less for technique and perfection on stage and care more for catharsis, adrenaline, and connection.

Do you think there’s a piece of gear that really helps Fruit & Flowers define its sound?

Ana: Hmm. I love the sound of my guitar; it’s a 1965 Harmony Bobkat. Those gold foil pickups. I play it through a Fender hot rod deluxe amp, which has a very sweet back story. Much of “Turquoise” was tracked using a Roland Gaia synth. I’m not sure it’s any one piece of gear that drives our sound as much as the interplay between the instruments.

Lyzi: I just got a Vox AC30 amp and a Fender Tele. I like that combination. I play on a Fender Strat sometimes and I used to play a simple little Epiphone Special. I like warmer tones for my guitar sound. I guess that could be a defining sound thing.

Jose: I got a shitty Tama kick pedal at a pawn shop in Austin. It probably makes no difference in the band’s sound but I like playing with it.

Tarra from Sharkmuffin dropped us a hint that Lyzi has a serious envy-worthy board. Can we get a peek at the band’s pedal boards (pics would be awesome) and a quick run-down of how you use each pedal? 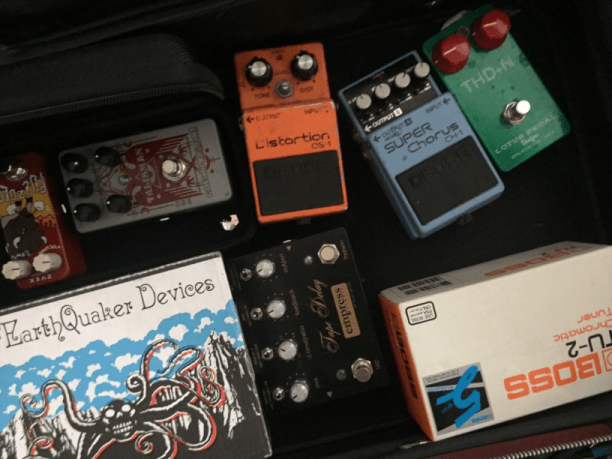 Lyzi: Lol… I do? Awesome! I had never had pedals before this year. With luck and the help of a friend, I scored at least 7. I have some I don’t even know what to do with… kind of a nice feeling. I use a Lotus Noise and Distortion pedal, Boss DS-1 Distortion, Boss Super Chorus, Empress FX Tape Delay, and a Catalinbread Talisman Reverb. The Lotus pedal is great for feedback and leads or just a little extra boost. It can get pretty intense if you want to take it there. The Chorus I typically use for a wobbly tremolo effect, especially in songs like “Turquoise.” I keep my reverb pedal on for almost all the tunes. I like the combo of the reverb and tape delay when getting experimental or making noise. The tape delay is special to me. It was a gift from my beloved friend from Amarillo, Aaron. He gave it to me last time we toured when we played in Amarillo at The 806. It has “vintage” and “old” tape sound options, modulation, tap time, etc. It’s a cool tool. Below is a photo of my pedal bag. Note that I do not have a board, lol. 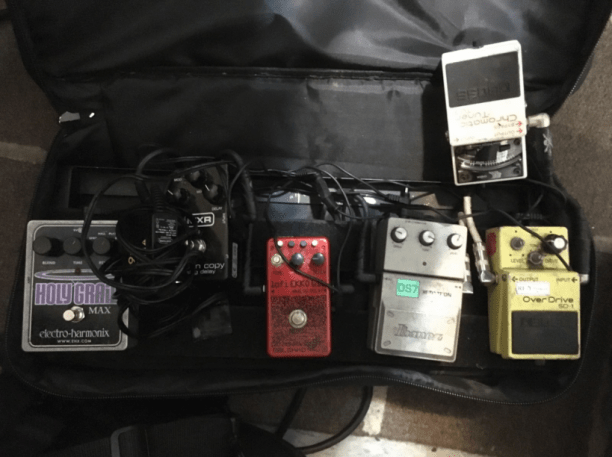 Ana: I use an Analogman modded Boss Super-Overdrive for a boost, tone control, and a little crunch, mostly for riffier parts or when the chorus hits. Next one is an Ibanez DS-7; it sounds abrasive and kind of awful but I love it. I mostly use it for solos, so the sound cuts through. Next is a Malekko lofi EKKO 616 analog delay – I like to use it in concert with my MXR carbon copy, with a longer delay time set. Or as a backup, because sometimes I use the carbon copy to create delay feedback loops and play with that sound, let it build and then stop it cold. I like having another delay pedal in the chain so when I click off the Carbon Copy, there’s still some delay on the signal. I tend to keep the [Electro-Harmonix] Holy Grail on the Spring setting, to get that surfy reverb sound. And I use some of my amp’s reverb as well.

What’s the story behind Lyzi’s guitar, if any?

Lyzi: I play two different guitars depending on my mood. The Fender Tele I frequent is technically just being borrowed from a good friend of mine, the same friend who helped me score a lot of my pedals. I plan to keep it forever though. It was previously owned by Noveller. It still has tape with settings and notes written in sharpie. A majority of the pedals came from her collection as well. I look up to her as a guitarist so it’s really cool to have that gear. The other guitar is a Korean Fender Strat that I bought off my friend Sean. It’s a beautiful guitar and I tend to play her more gingerly.

Has there been any non-band members that have been important in developing your live and recorded sound?

Ana: We worked with John Thayer at Thump Recording, who did an awesome job engineering the recordings. George Harris at Creative World mixed and mastered the EP. He’s an artist. His work contributed a ton to the quality of the recorded sound. Other than that we have some heroes who have guided us, namely Tarra, and plenty of others who have given us an ear, or given us gear (hi Mark). 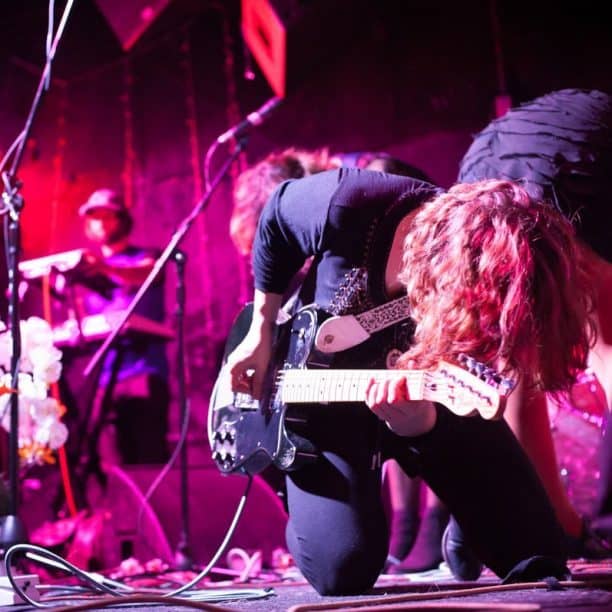 Are there any up and coming NYC artists that you’re really excited about?

Any exciting plans for the summer/fall?

Ana: We’re on tour RIGHT NOW to support the “Drug Tax” release. Then taking August off from shows. 2017 has been a whirlwind year so far, we’ve spent almost 3 months of it on the road. It’ll be nice to spend some time at home to reconnect with loved ones and myself; to work and write and make some art, to sustain myself financially and creatively. The band is hoping to get back in the studio early fall, to continue working on our follow-up EP.

Lyzi: I’m going home to Texas to decompress, visit family and record solo material! I’m looking to put those songs out into the world some day soon. I also plan on recording demos for some future FxF songs.

Jose: I’m becoming an uncle in August, so I’ll go home to meet my nephew, Balta 🙂 I’m also going to a friend’s wedding in Cartagena (a beautiful city by the beach). It will be an inspiring month to recover energies after some busy months. Then I’ll be ready to start working on our second EP and whatever is coming.