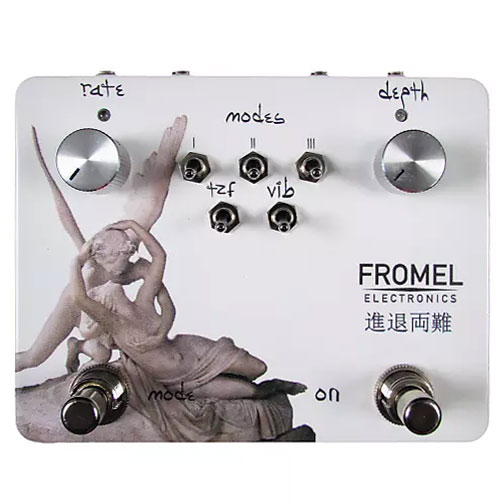 You may have gathered by now that here at Delicious Audio we prefer creative pedals over all other pedals. Digging through some old YouTube content we found the Reverb.com video below and were happy to stumble upon the Fromel Seraph Deluxe, a stereo chorus that was missing from our article about the best chorus pedals.

The Seattle-based company is mostly known for their amp DIY kits, but has also an intriguing selection of pedals, from which the Seraph stands out as the only non-gain or EQ-related one.

Modeled after the Roland SDD-320 Dimension D rack, the Seraph offers the same 4 modes of the original, plus allows to mix and match those modes for an extra 4 combinations, while manual mode allows for precise setting of the modulation’s rate and depth.

This extra flexibility allows this pedal to deliver effects beyond the scope of the original, like rotary, zero flanger and pitch vibrato.

We added the Fromel Seraph Deluxe to our article about the Best Stereo Chorus Pedals.

The Seraph Deluxe is a true stereo in/out analog dimensional chorus modeled after the famous Roland SDD-320 Dimension D which was introduced in 1979 and used extensively by Brian Eno, Talking Heads, Kate Bush, U2, and others. In many ways the dimensional chorus defined the sound of the 80’s. The original unit took up two rack spaces and had 4 preset buttons. In 1985 Boss released the DC-2 a compact pedal dimensional chorus with the same 4 preset buttons, yet it lacked some of the features of the SDD-320 such as line level and stereo in. The original Fromel Seraph released in 2008 was based on the DC-2.

Over the last 10 years we have been working on this circuit exploring all the possibilities it can offer, while keeping the size pedal board friendly. The presets are slight variations with a very slow rate and very deep depth. In addition to the 4 classic modes the presets can be mixed and matched to make a total of 8 presets. There is also a manual mode that allows for precise setting of the rate and depth allowing for a very fast rate and shallow depth getting the effect into Leslie territory. What makes this chorus truly unique is the dual delay lines which allows for a Through Zero Flange effect when the dry signal is cut. Finally by cutting one of the delay lines and the dry signal a true pitch vibrato is produced.

The Seraph Deluxe uses modern delay chips for a bright and clear effect. The unit can take line level like a champ with no clipping and can be used in a pro-audio recording or live setup as an insert, or with keyboards and other instruments with a line level out.