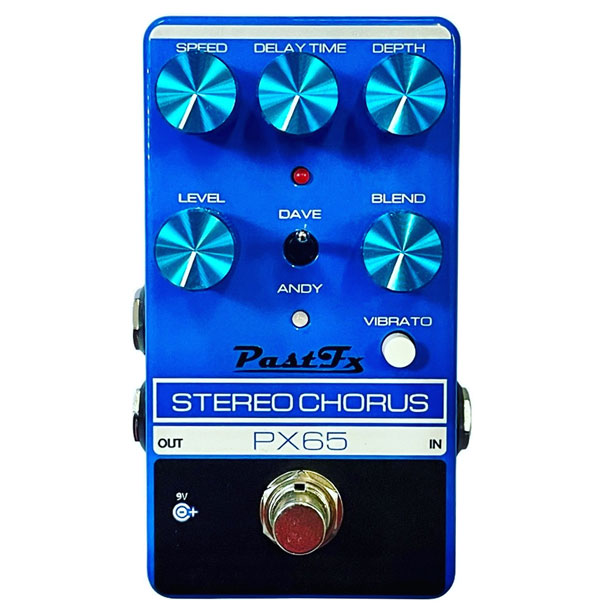 Australian PastFX makes it quite clear that it’s in the business of recreating/improving existing effect circuits. With the Stereo Chorus PX65 they keep faith with this philosophy by releasing an evolution of the DOD FX65 Stereo Chorus.

The original was probably the first almost compact stereo chorus on the market (we added that “almost” because the case is just a little wider than the compact format) and the appreciation for its sound is growing among pedal-heads.

The PastFX take on this circuit is quite “aggressive,” adding a lot of new functionality although respecting the original overall circuit and Bucket Brigade components.

The DOD pedal had only three knobs, which are present in the PastFX version in the top row, the standard chorus controls for Speed, Delay Time, and Depth, but offer here wider settings, allowing for slower/faster speeds, higher delay times, and a deeper maximum value for the Depth knob.

The Delay Time is a peculiar control for a chorus, and opens up a series of sonic possibilities other similar effects don’t offer, like flanger-like tones and choruses with a different EQ quality due to different phase cancellations happening with different delay settings.

The PastFX PX65 also adds two extra knobs to the original circuit: a Level knob useful in recovering the signal lost through the effect, and a Blend control that actually removes some of the clean signal from the original dry/wet balance (this means that when turned all the way up, the amount of clean signal is the same as in the original DOD pedal)

A pushbutton Vibrato switch entirely cuts out the dry signal (and turns the lower led from red to blue). The Blend knob will need to be fully CW in this setting.

Have a listen to the PastFX Stereo Chorus PX65 in the video below. We added it to our article about the best chorus pedals (stereo and mono).

The PastFx Stereo Chorus PX65 is a faithful reincarnation of the beloved DOD FX65 Stereo Chorus, which is rumoured to have been used by John Frusciante of the Red Hot Chili Peppers during the Blood Sugar Sex Magic album era.

• The original FX65 and FX62 (Bass Model) were usually populated on the same FX65 PCB. We included 2 internal slide micro switches that enable switching between either the FX62 or FX65 circuits. (selecting any combination of slide switches will not damage the pedal)

• Feedback from some FX62 users, expressed the desire to have a volume control as some felt the effect was not always at unity with their bypass signal. A Level control has been added to solve this issue. The Stock core level can still be achieved by turning the Level knob fully CCW. This becomes necessary when engaging the Vibrato mode. (see below)

• A Blend control has also been included. This limits the amount of Wet / Modulated signal that combines with the dry signal. Again the stock circuit can simply be achieved by turning the Blend knob fully CW. Sometimes the reduction of the wet signal can produce a slightly perceived volume drop. The Level control can compensate for this, bringing the chorus signal back to unity gain.

• Also not included in the original is a Vibrato feature .A pushbutton Vibrato switch can cut the dry signal to create this effect. When engaged, the lower red on/off led indicator will change to blue indicating this mode. The Blend knob will need to be fully CW in this setting. In this mode the Level control will need to be adjusted to return the lower signal level to unity gain.

• Lastly, thanks to observing the creativity of how Andy Martin (Andy Demos) uses his Modded DODFX65, we have included the Dave / Andy switch. Dave Mode (Named after the great Dave Simpson) is the default Dod FX65 setting.

• Switching to “Andy” mode, the pedal can now access the stereo output “out of phase” tones without having to swap cables between the mono and stereo output jacks.

• When in this mode, faux “Through-Zero Flanging” tones can be achieved when turning the Speed control to very slow and having the delay time control between 0-25%

Blend knob to dial back the wet signal.