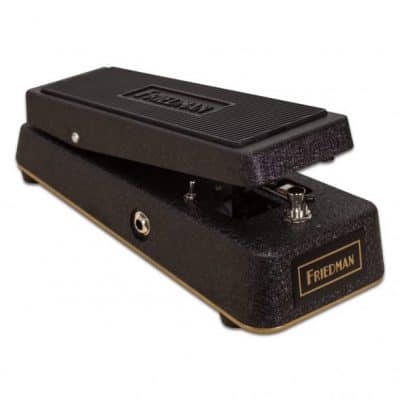 Friedman Amplification just came out with a new wah pedal that was built from the most popular requests the company received from its clients.

Based on the classic vintage wah design we all know and love, the Gold-72 Wah Pedal adds a series of features that are both useful and tone-relevant. On the useful side of things, a blue led light in front of the pedal signals whether the wah is on or off – a basic detail missing from most wah pedals.

For the tone tweakers among you, a three way toggle switch placed under the treadle controls the length of the sweep (classic voicing in the center position, shorter in the down and longer in the up position), while an internal switch lets you engage or bypass the pedal’s buffer.

Check out this video by Sweetwater:

The Friedman No More Tears Gold-72 Wah delivers the classic wah tones you crave with the ability to fine-tune the pedal’s feel and character tone. The first thing you’ll notice when stomping down on the Gold-72 Wah is the convenient LED, which is perfectly placed to let you know when it is engaged. Another player-friendly feature is the inconspicuous 3-way sweep switch hidden under the pedal’s treadle. With a simple flip of the toggle, you’re able to find the sweep that feels ideal for your style. Tone isn’t the only feature that is adjustable. The Gold-72 has a convenient and easily accessible Allen screw adjustment under the heel of the pedal that allows the tension of the footboard to be dialed in to each players taste. Add in switchable buffered or true bypass operation, and the Friedman No More Tears Gold-72 Wah pedal just might send those other babies away crying.

Vintage-voiced Wah Tones
At the heart of the Friedman, Gold-72 Wah is a classic-sounding, almost vocal effect, that will bring you back to the great rock and funk tones through the decades that we’ve grown to love. Whether wailing through two humbuckers and a full stack, bringing the clean rhythmic sweeps of the ‘70s, or finding a unique voice all your own, you’ll find the Gold-72 Wah feeling right at home on your board.
? Classic voice that works equally well with clean and driven tones
? Familiar form factor that feels great under your foot
? Great with single-coil and humbucker-loaded guitars

Customizable Performance
Where the Gold-72 Wah really stands apart from the pack is its ability to conform to your preferences. Want a wider sweep? Hit the 3-way Sweep Switch. Want a tighter feel? Give the Allen screw tension adjustment a quick turn. And the internal buffered/true bypass switch means your wah will sound great wherever you place it in the chain.