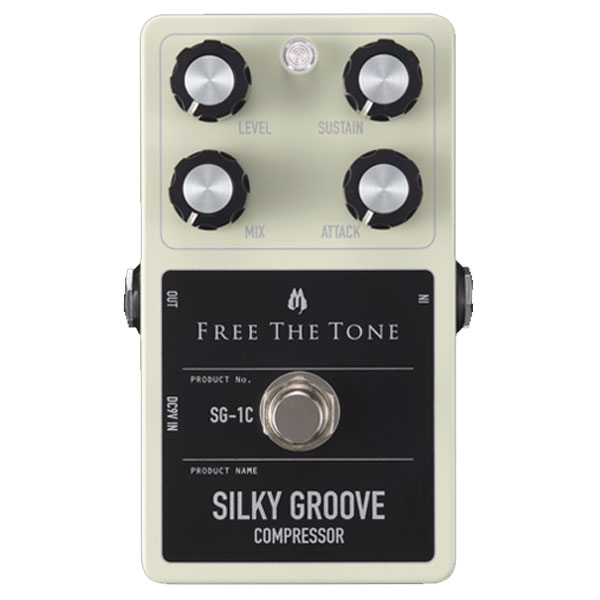 Japanese builder Free the Tone has developed a great reputation for their incredibly deep digital delay pedals, but they do manufacture also simpler analog devices, like the Silky Groove SG-1C compression, which replaces in their roster the similarly named Silky Comp SC-1.

Unlike the company’s famed delay pedals, the SG-1C is a “less is more” kind of pedal, sporting just four knobs and a circuit that was carefully designed to make your performance sound more dynamically consistent and natural, and to allow you to personalize the compression through separate Sustain and Attack controls.

The main difference from the previous version of the pedal is the Mix knob, which allows to reintroduce the clean signal and is a feature particularly appreciated by bass players.

Have a listen to the Free the Tone Silky Groove SG-1C Compressor in action in the videos below.

The SILKY GROOVE is a new compressor in FREE THE TONE’s standard product line. It is based on the SILKY COMP which was highly appreciated in our Custom Series. While inheriting SILKY COMP’s sound and enhancing functions and ease of use, the SILKY GROOVE newly incorporates a dry mix circuit requested by many guitarists and bassists.

Considering the phase between the effect and dry signals, we carefully designed this circuit to avoid the phenomenon in which these two sounds can be heard separately when mixed together. With the new circuit you can get a well blended sound which cannot be obtained from conventional mix circuits. This dry mix circuit can provide you with a broad range of sound from a heavily compressed effect sound without any dry signal to a fast and strong signal comprised of only the dry sound.

Generally a compressor is an effect unit that can be difficult to adjust. Operation of the SILKY GROOVE’s compression circuit has been optimized to make compressor adjustment easier. The ATTACK knob sets the strength of the incoming sound and the SUSTAIN knob varies the depth of compression to control sustain. Since each control parameter changes smoothly, your favorite setting can be found easily.
The SILKY GROOVE can create silky-smooth and natural compression without impairing important elements during performance such as true sound characteristics of your guitar/bass, subtle plucking and picking nuance.

The SILKY GROOVE brings more expressiveness to your performances. For example, if you are a guitarist who prefers precise and accurate arpeggios, sharp rhythm tone, and unconstrained solo tones; or if you are a bassist who wants a clearly articulated bottom end or springy slaps, etc., the SILKY GROOVE can give you the support you need.