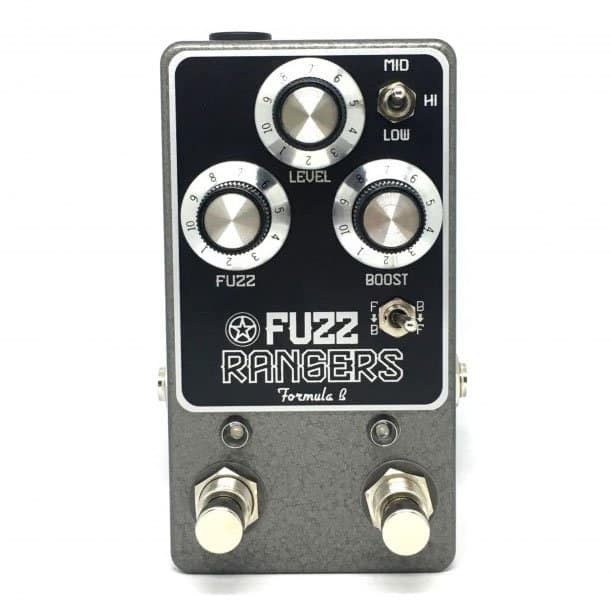 Hand building their pedals in the small town of Todi in the beautiful region of Umbria (Italy), Formula B specializes in anything related to gain, in stompbox format.

Their brand new Fuzz Rangers was born from an interaction with the company’s user base that was asking for a pedal that could cover many different fuzz flavors. Hence the idea of a dual channel pedal that combines a Fuzz Face style circuit with a Rangemaster Treble Booster, featuring faithful recreations of those legendary vintage circuits.

Of the three knobs, two (Fuzz and Level) control the Fuzz Face channel, while Boost is the lone control for the Rangemaster clone, although the top toggle switch also affects it by highlighting different frequencies (Mid, High, Low). This is a function many reviewers found incredibly useful.

When both on, the two circuits are stacked on top of each other and feature dedicated footswitches. A Routing toggle on the right side of the case allows to invert the order of the pedals, for extra tonal possibilities.

Here are the demos of the Formula B Fuzz Rangers

The Fuzz Rangers Pedal is born in collaboration with our Artists.

They asked for a Fuzz to cover many sounds, having the ability to “clean UP” when the volume of the guitar is ROLLED BACK and working good after the Wah-Wah.

Well… our Fuzz Rangers is ALL of this!

With this toggle, you can choose if the Fuzz goes into the Boost or vice-versa, giving you lots of combinations and different tones under your feet.

On the left side, you have the FUZZ effect, powered with n.o.s. BC108 transistors and carbon layer resistors to get a warm and vintage tone as the early Arbiter Fuzz.
Every component has been matched to work well, even with the boost effect engaged, having the minimum background noise as well.

The right side is occupied by the BOOST effect. The circuit is inspired by the famous RANGEMASTER and is calibrated to work together
with Fuzz and other pedals in your chain, without having problems of polarity and power supply. (This is one of the reasons why we used Silicon transistors instead of Germanium ones).

Last but not least, we inserted an EQ switch to choose from 3 different frequencies cuts.

The pedal is entirely handmade in our laboratory in TODI – ITALY