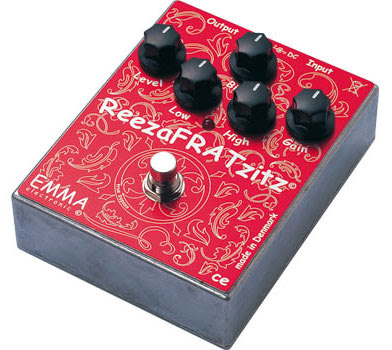 If the crazily named Reezafratzitz distortion pedal from Denmark’s Emma Electronics (street $245) has a dual personality, both of them are nasty. But for lovers of saturated distortion, the pedal’s double-trouble approach to fuzzing up sound waves offers musical, usable tones.

The magic in the box is the Reezafratzitz’s “Bias” knob. Turn it all the way counterclockwise and you’ve got what Emma describes as “Class B” distortion, an amp class that’s rarely used but that’s known for its flabber. Turn it all the way clockwise and the pedal emulates “Class A” distortion, common to small tube amps. (The more efficient AB amp class alternates the signal between two sets of tubes, sharing the strain and allowing for a more efficient, louder amp—a big yawn from a distortion point of view).

In practice, the Class B bias setting sounds deep and compressed, along the lines of a cranked Marshall JCM900 head, whereas the Class A side lessens the compression for a more open distortion (relatively speaking). Turning the Bias knob anywhere in between blends the two sounds.

Let’s be clear, this isn’t a subtle pedal: It goes from distorted to very distorted, screaming like a trapped witch at the slightest opportunity. And the pedal’s other controls are a little blah: level, high, low and gain don’t really justify the effort that went into naming the thing.

Despite these limitations, though, this pedal is a blast to play though, and it’s easy to unleash your
squealing inner rock god. You don’t run much of a gamut with this pedal sonically speaking—good luck dialing in anything close to gently overdriven—but if you need to bring the noise, the Reezafratzitz is well worth plugging in and turning up. — Howard Stock