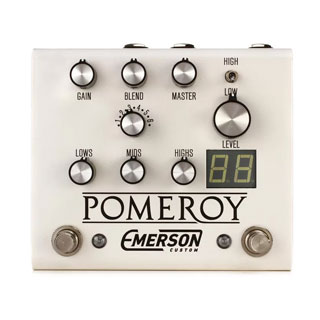 “The Emerson Pomeroy is a Boost, Overdrive & Distortion Pedal featuring a 100% Analog Signal Path. It’s jammed packed with an immense amount of features that allow the player ultimate control over their tonal palate and shaping needs. The Emerson Pomeroy Features 2 Independent Channels that pair incredibly well with each other. They can be used independently or together. There is no order toggle on this pedal, as we believe the Pomeroy’s Boost Sounds best after its Overdrive/Distortion circuit.”