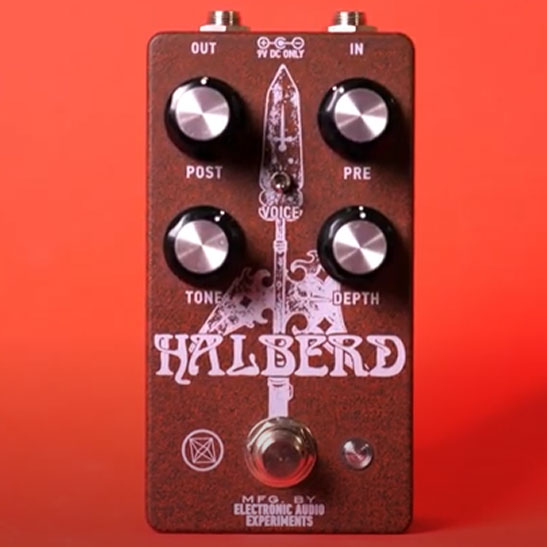 Massachusetts’ Electronic Audio Experiments unveiled V2 of its Halberd overdrive, an original circuit presented as “a medium-gain device with the harmonic fullness and grind of a much higher-gain pedal.”

Version 2 comes in a compact enclosure (about 2/3rds the size of V1) and features a redesigned circuit that ditches the NOS germanium transistor while adding a 3-way Voice Toggle that delivers the following tones:

The four knobs do what’s expected of them, with Depth acting as a low-frequency shelving filter at the input and Tone as a high-frequency shelf cut at the output.

Hear the sounds concocted by the Electronic Audio Experiments Halberd V2 in the videos below.

The Electronic Audio Experiments Halberd is a discrete transistor overdrive circuit designed for the greatest possible dynamic range and note clarity. It fills a special niche our family of drive pedals—a medium-gain device with the harmonic fullness and grind of a much higher-gain pedal, one that stands apart from both the brazen buzz of op amp distortion and the smooth breakup of JFET amp emulations alike.

The Halberd’s character comes from over a dozen transistors working in harmony. It is familiar but unique, sitting somewhere between blown-up tweed and an overloaded console. Rather than resigning itself to transparency, it imparts its character in a collaborative fashion, responding in unique ways to different instruments and amplifiers but not without leaving its distinct fingerprints. And of course, it is equally at home on guitar, bass, and synthesizer.