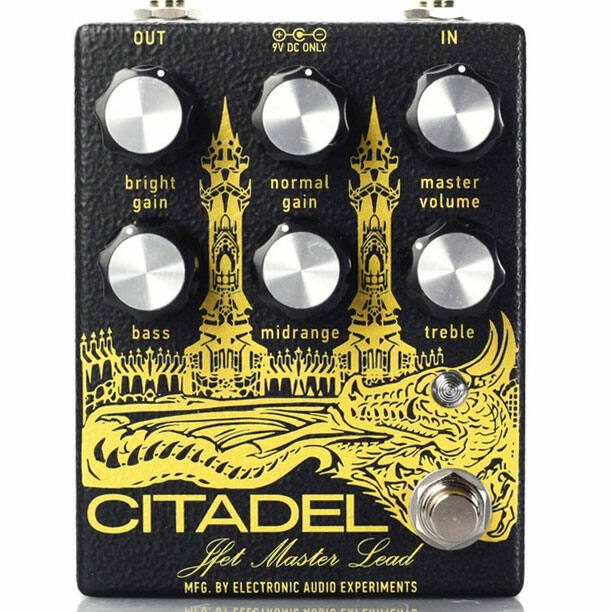 Based on the same topology as the company’s popular Model feT (voiced after the Sunn Model T amp), the Electronic Audio Experiments Citadel is a preamp-style overdrive inspired by another amp (or rather, amp series) beloved by most electric guitarists: the Marshall Plexi.

It doesn’t focus its attention on a specific model out of the several Plexi amps released between the ’60s and the ’70s, but offers their classic sonic character on the entire gain spectrum, from piano-like cleans, bright overdrive, and sizzling lead tones, always delivering the Plexi’s signature sparkly midrange.

Just like the Model feT, the Citadel emulates both the preamp and the tube power amp stage of the amps that inspired it, which makes sense since it’s the power amp section that does most of the overdriving.

You can hear its sounds in the videos below. We added the EAE Citadel to our article about the best Plexi pedals.

The Electronic Audio Experiments Citadel is a preamp-style overdrive inspired by the everlasting sounds of British amplifiers from the ’60s and ’70s. Rather than emulating a specific model, it encompasses our favorite parts of a whole generation of amplifiers including warm piano-like cleans, bright clear overdrive, and sizzling lead tones.

The Citadel began as a series of experiments on our Model feT pedal. Like any tube amp, there are ample opportunities for modifications. After all, the original Model T was itself a modified take on the Super Bass sound, delivering a distinct variety of the plexi flavor with fuzzy breakup and a huge low frequency punch. So, what if we flavored it our own way? Once Brad completed his “Marsha” prototype, it was on. In a way, you can almost think of the Citadel as a re-plexi-fied Model T sound, trading low end sludge for a sparkly midrange focus. In another way, you can think of it as what we’d do if the original Model T wasn’t too sacrosanct to modify.

Finally, like our Model feT, the Citadel emulates both the preamp and power amp sections of a tube amp to provide a full-bodied overdrive that feels powerful and responds wonderfully to boosts, drives, and fuzzes in front. It can be used either a conventional drive pedal or as the workhorse of an ampless signal chain.