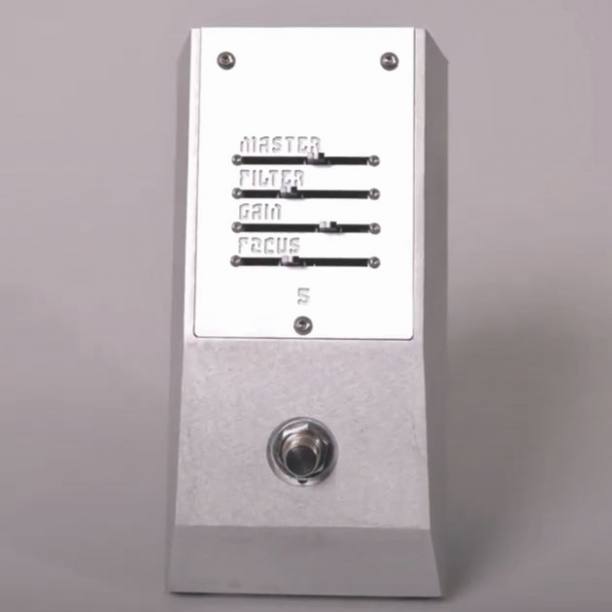 Although it’s presented as a booster, this device is more than just that, and definitely not a clean one: with its discrete op-amp gain stage pushed by a second gain stage with an aggressive high-frequency emphasis, this thing can get pretty sharp, but it’s overall extremely flexible.

The Filter slider can cut down to a minimum frequency of 480Hz, while the Gain one can push from 26db to 48dbs. The Focus is a high mid-frequency boost that can add up to 26dbs in that range. The Master  can add an extra 20dBu at maximum setting.

It’s part of a new line of pedals called 0xEAE that’s been in the making since 2017 whose goal is to marry cutting edge visual and engineering design with stage-proof sturdiness.

This is the 0xEAE Boost: the first in a new line of pedals developed with the design collective Obstructures. Our pilot batch will be going live for sale through our webstore on Friday, April 30, at 2PM EST.

This pedal is a discrete op amp gain stage, pushed by a second gain stage with an aggressive high frequency emphasis. Calling it a boost is perhaps a misnomer, as it is clangy, harsh, and loud—instant noise rock in a box.

If you want to read more about the specs, listen to some sound clips, and check out a draft of the manual, you may find the product page here. We also have a demo coming the week of the release to showcase even more sounds.

OB_EAE_BP-6.jpg
(Brief aside: this pilot batch is small. We wanted to feel things out before committing to a high quantity production run. This is not a “limited edition” product. We are simply doing our best to keep up as the global electronics supply chain collapses around us.)

The 0xEAE line has been a long time in the making. Development began back in late 2017/early 2018, when our good friend Evan Craig (aka skullservant, of Dirge Electronics infamy) put me in touch with Matt at Obstructures, who wanted to develop an indestructible pedal. As a huge fan of their guitars and overall aesthetic approach, I was onboard immediately. We exchanged hundreds of emails with design notes, mechanical drawings, and aesthetic goals while frequently exchanging circuit board prototypes and 3D printed enclosures. The majority of us have been tethered to the academic calendar in some fashion, so we found ourselves cyclically reiterating on the design during the gaps between semesters. In a way I am glad it took a long time, because I don’t think my 2018-era circuit design chops would have cut it. Even now I hope that I made a sonic palette befitting such an imposing enclosure, but I gave it a hell of a try and I am excited about the foundation we have put in place for future products.

Thanks for reading and I’m excited to hear what y’all think of this thing.