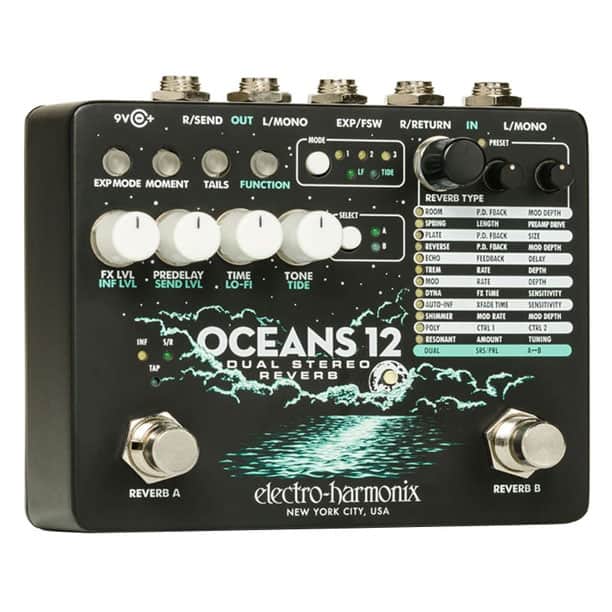 Electro-Harmonix showcased a few prototypes at NAMM 2020 and the Oceans 12 Dual Stereo Reverb is probably the most exciting of the bunch. It’s a stereo digital reverb with presets that take the Ocean 11 one step further (hence the name) by adding an extra reverb engine. The two reverbs (each featuring 12 algorithms) can be run in series or parallel.

Each of the four main white knobs has a double function and the two black knobs on the right of the Type knob control parameters that vary depending on the selected mode. It also offers various connectivity options like Return/Send configuration and Exp/Footswitch In.

Check out the videos of the Electro-Harmonix Oceans 12, below – we added it to our shopping guides for the Best Multi-Mode Reverb Pedals and Best Stereo Reverb Pedals.

A Tails switch provides a choice of whether the reverb effect fades out naturally or stops immediately when the pedal is switched to bypass. In most settings the pedal is also capable of producing infinite reverb which can be played over with a different reverb effect. Comes equipped with a standard EHX 9.6DC200mA power supply.

The Oceans 12 is a processing powerhouse!