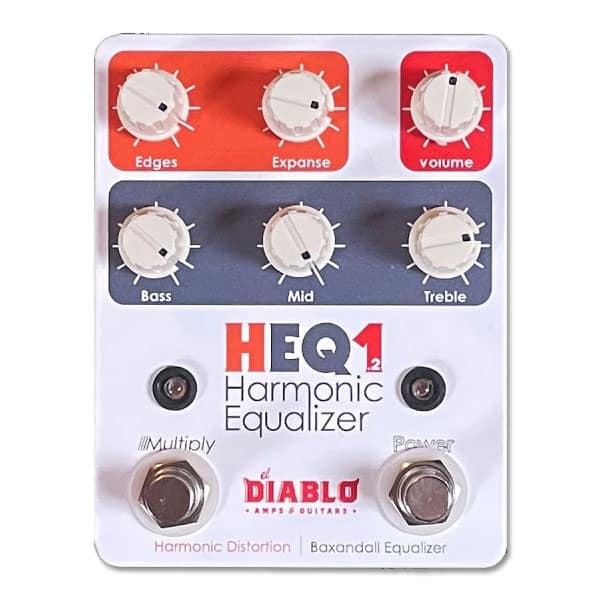 Originally created by a Minneapolis pedal store as a way to celebrate, through a limited release, their fuzz festival called Fuzzapalooza, the El Diablo HEQ gathered so much interest to convince the store owners to make it a non-limited release, and actually invest in some improvements, hence this V1.2 version.

The pedal is a wild and crazy fuzz followed by a three-band EQ, with a separate footswitch to activate the EQ section.

The new version, printed in 200 units, replaces some parts and sweetens the EQ, check out the video of it by Pedals in the Dark.

In 2017, we introduced the HEQ1 Harmonic Equalizer fuzz pedal, designed by the brilliant Minneapolis-based audio engineer Peter Bregman.  The limited release was intended to celebrate our annual FUZZAPALOOZA event here at El Diablo.  Given the unruly and cantankerous nature of the HEQ1, we thought it would only appeal to sonic explorers on the outer edges of music.  But the pedal sold out instantly, and despite the odds, it has captured the hearts of pedal enthusiasts around the world.  The HEQ1 even earned a spot in the groundbreaking 2019 tome “Pedal Crush” by Kim Bjørn and Scott Harper!  We’ve received numerous requests to resurrect the HEQ over the years, and though we initially resisted the idea, we are really proud of this irascible circuit and we’re chuffed it has found an audience.  So…back by popular demand, say hello to the HEQ1.2!

The HEQ1.2 differentiates itself from the original in the following:

We are gearing up for a regular production run later this spring (April release).  Reserve yours today!!