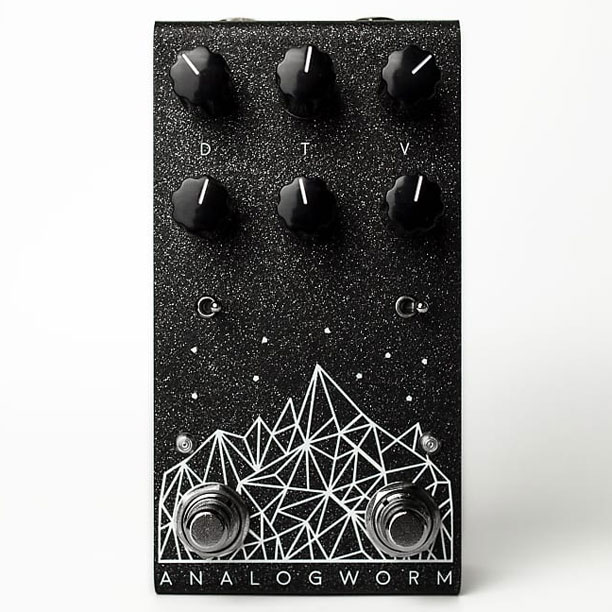 Russian pedal builder Analogworm just released Mk III of their OD808, a dual overdrive featuring a Tube Screamer-style OR transparent drive on the left side and – for the joy of Mr. Michael Fuller, who clones others but hates to have his pedals cloned – an OCD-type circuit on the right side.

Each channel features separate controls for Drive, Tone and Volume, and a dedicated footswitch, but there’s a lot more that doesn’t meet the eye: Each drive has a character toggle switch that modifies its voice: a “Fat” option for the TS side and a Mid Boost for the OCD.

On the side panel, a switch lets you select the operating mode of the TS channel: transparent in the up position, ts808 in the down position.

But that’s not it just yet! There are six internal DIP switches that allow for extra tweaking! This is what they do:

Take a listen to the tones produced by the Analogworm OD808 MKIII in the video below.

The OD808 mkIII is a dual overdrive pedal with two legendary effects on board: the OCD and the ts808 with tons of modifications, top switching, compact body and smart bypass system. OCD is known for its rich sound, with slightly clipped mids, but deep lows and bright highs. The Screamer is a classic choice to dry out the overdriven amp channel, and in that role it works great in this pedal in front of the OCD, allowing you to cut low frequencies and add gain. In transparent mode, Screamer is a great independent low-gain overdrive.

1. Drive – adjusts the amount of overload.

2. Tone – adjusts the brightness of the sound. Brighter to the right, darker to the left.

4. Screamer fat – Move to the left to add bass.

5. OCD mid-boost – Move to the right to add brightness and overall volume.

8. Side switch. Allows you to select the operating mode of the red channel. Transparent in the up position, ts808 in the down position.

1. Raise the first lever up to enable symmetrical limiting, leave at the bottom for asymmetric. Symmetrical clipping produces a more compressed sound.

2. The second lever in the down position excludes the limiting section from the chain, this allows for louder and less overdriven sound.

1. Raise the first lever to cut the mids.

2. Raise the second lever to increase the amount of bass.

Bypass operation
The OD 808 mkIII has a smart bypass with two modes of operation and the ability to change the order of effects on the fly. Let’s consider them in more detail.

To change the order of effects, turn on the left effect and hold down the left button. After a second, the order of the effects will change, this will be seen by the colors of the LEDs.

To switch from normal to dual mode, turn on the right effect and hold down the right button. The right LED turns purple and you enter dual mode.

Dual mode
In dual mode, the right button turns on both effects, while the right LED turns purple. The left button works only for a long press and changes the order of effects. The color of the left LED indicates which effect is the first in the chain. Screamer is red, OCD is blue.
To switch back to normal mode, turn on the effect and hold down the right button. The LED will flash and you will return to normal mode.
Transparent screamer mode
Screamer can work in two modes: classic ts808 and transparent. You can select the mode with the switch on the left side of the case. The upper position corresponds to the transparent mode, the lower one corresponds to the ts808 mode. In transparent mode, the amount of gain decreases, the mid-frequency hump characteristic of the screamer decreases, and the amount of high frequencies increases. This turns the red channel into a great low-gain overdrive that can be used alone, as a booster / ton-shaper after OCD, or as a heating pad in front of it.