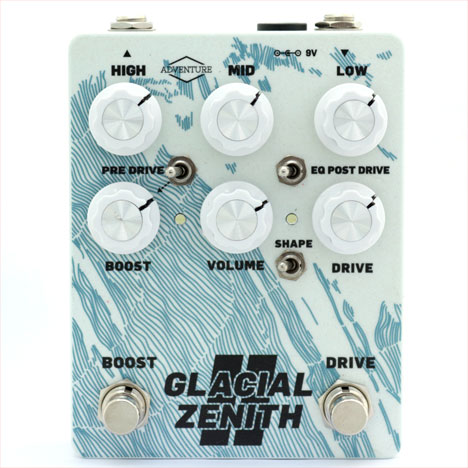 From a functionality perspective, what sets this Overdrive + Boost apart, besides its versatile EQ section, is the ability to let you route the three circuits the way you prefer – keeping the drive in the center position.

Boost and Drive have their separate footswitches, which is extremely useful (and allows this pedal to be added to our list of the Best Mid Priced Overdrives with Boost!), and the Shape toggle switch offers an extra palette choice with two different clipping modes.

As far as tone is concerned, you can get an idea of how it sounds from these video by Eric Merrow and Living Room Gear Demos:

At its most basic, the GZII is a Drive, a 3-band EQ, and a Boost, all in a box together. What really takes it to the peak is the ability to put them in effectively whatever order you want.

The EQ Post Drive let’s you decide whether the EQ comes before the Drive (left position) or after (right position). Drive ? EQ is the classic order you’ll find on most dirt pedals, as the EQ directly shapes the sound coming out of your distortion stage. EQ ? Drive gives more control over the actual texture of the dirt sound, as you’re shaping your guitar’s tone before it gets dirty. Kinda like the difference between twisting the tone knob on your pedal vs the one on your guitar.

The shape of the thing: focused, tactical affront or reckless, unruly barrage

The Pre Drive Toggle then allows you to put the Boost before or after all the other stuff. Put it after (right position) to increase the output volume. Put it before (left position) to slam the Drive even harder, increasing the distortion.

Exactly where the ice ends and the gravel begins is unknown. All that is certain is the path of destruction it leaves in its wake. Wield it with care.