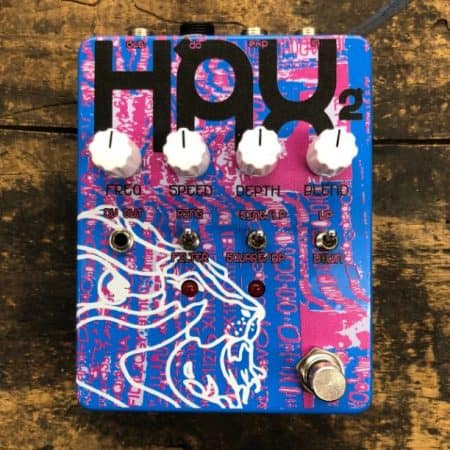 During NAMM 2018 Ben from Dwarfcraft Devices came to see us at our Stompbox Booth to shoot the video of the Hax 2 you can see  at the bottom of this post (we kept the blurb we wrote at the time, under this one). The pedal is finally officially out and both Ben and its company’s distributor published new videos of the effect, which we already added to our list of Best Ring Modulators.

This is an evolution of one of the company’s oldest pedals (the second one they ever released and out of production) with tons of new features, including

As it’s often the case with pedals by this Eau Claire based manufacturer, this is a unit for guitarists that are looking for ways to go beyond the purity of tone and are searching for creative, often synth-like way to use their six strings.

Dwarfcraft Devices didn’t have a booth at NAMM this year but a guy named “Aen” (vaguely similar if not identical to the company’s owner Ben…) was roaming the show floor, carrying the company’s new version of their ring modulator, the Hax 2, scheduled to be shipping later this year.

Here’s the video of the HAX 2 we shot at our NAMM 2018 Stompbox Booth, discover more new devices in our comprehensive, interactive page of new pedals announced at NAMM 2018.

HAX2 is lightyears beyond the circuit that inspired it. You now have the choice of a square or sine wave ring mod, allowing for classic sci-fi tones and jarring new textures. Both waveforms have an extremely broad frequency range, from subsonic tremolo to laser blaster highs or, with just the right blend settings, a warm chorus-like effect. An envelope follower can apply your right hand dynamics to the frequency of the ring mod for subtle to extreme shifts that react to the vibe of the song.

HAX2 also boasts afilter mode that has a high preset resonance for maximum harmonic content without self-oscillation, and it shares the envelope following capabilities of the ring mod. This feature will allow for exciting percussive sounds, funky wah-wahs and synth-like tone shaping.