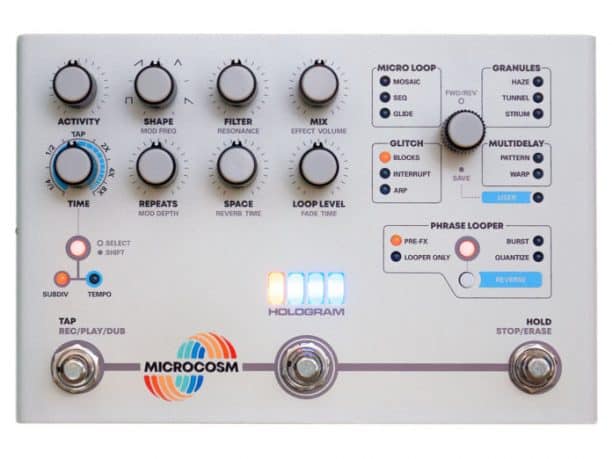 Since it was announced in February 2020, the Hologram Microcosm has been consistently the most searched pedals on this blog (it’s July 22nd at the time of writing).

But look beyond the hype and you’ll find that this pedal is a serious creative and compositional tool. It can be used with any instrument, in both live and studio contexts, and scrolling through the Microcosm’s 11 effects will allow the user to easily generate gorgeous textures that range from ambient, to glitchy, to psychedelic. The Microcosm is a bedroom shoegaze player’s dream come true, but it has also been quickly adopted by record producers as a speedy way to add effects to vocals, create ambient interludes, or just add some glitch and weirdness to a part.

In this article, we will explore a few creative features that have not been covered as extensively in other videos and articles about this pedal.

The Microcosm’s “Hold” footswitch is a freeze effect – but instead of sampling just one note, it will seamlessly loop a small segment of the wet signal from whatever you were just playing. This means that in Mosaic mode the sample will be a group of notes, while in Blocks mode it will usually be a pad or a drone.

The two following video demonstrates those two modes, focusing on ways you can play over the Held material in a live context:

Another cool aspect of the Hold feature is that you can manipulate any parameter on the Microcosm to dramatically change the sound of the Held sample.

The Arp effect under the Glitch bank of presets is basically a sequencer that the user can make more complex by changing the activity knob. Here’s a video demonstrating this:

The Granules effect, as the name implies, chops your signal up into tiny pieces and then recombines them to make textural reverbs and ambient soundscapes. It contains three sub-effects: Haze, Tunnel, and Strum. Here’s a video demonstrating some of the Granules modes on guitar, synth, and Rhodes keyboard.

Those are all the tips we have for now! Let us know in the comment section if you’d like to see more videos and articles on specific aspects of pedals like the Microcosm.