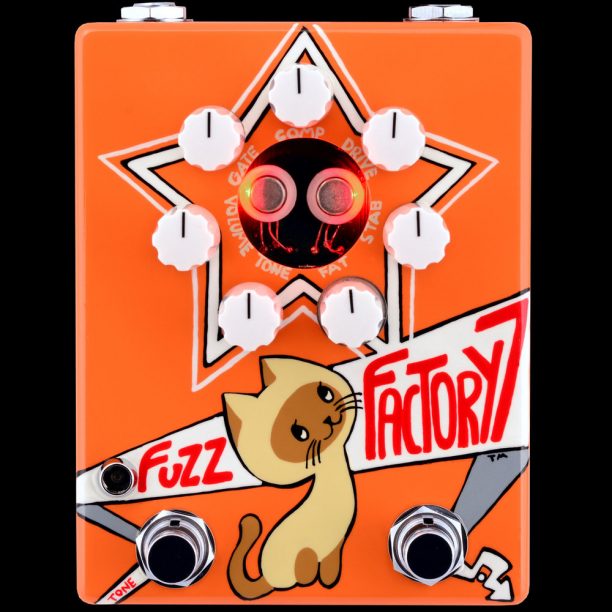 The ZVEX Fuzz Factory is a pedal that refined and redefined fuzz, and was able to survive the test of time.

Over the years, company owner/designer Zachary Vex played around a lot with this circuit, releasing various versions of the original with slightly different circuits or even just graphics (we can count at least 9 variations on the company’s homepage).

One of the last incarnation of the series is the most bizarre looking of them all: the Fuzz Factory 7 features 7 controls  organized in a circle, Buchla-style, and was inspired by stumbling upon a supply of black glass germanium transistors from the mid-fifties.

Recently the builder unveiled two variation on that design: the first one replaces the stock transistors with silicon ones, while the second one employs, instead, two rare, Russian GT308V germanium components.

Here’s the video of the Russian Fuzz Factory:

Germanium transistors. What makes them so special? It’s because they turn on faster. Sooner. They get turned on way quicker than any other transistors. Yeah, I got a favorite transistor, the shiny fragile amazing mosfet. But the germanium, bipolar and somewhat easily startled and delicate, that loves getting turned on, is my most memorable transistor. Enjoy. She’s waiting for you, respectable and wonderful, the happiest of all semiconductors, the most delicate and perfect. Rock on.

Where the Fat Fuzz Factory has a 3 position toggle, The FF7 has a nine position rotary switch and covers enormous sonic territory, from earthshaking low frequencies to “dog whistle” (figuratively) high frequencies. The Fuzz Factory 7 also has a passive tone control (with its own switch) to roll off high end if need be.

If you are curious to see how the original Fuzz Factory compares to the standard Fuzz Factory 7, look no further than this video below.