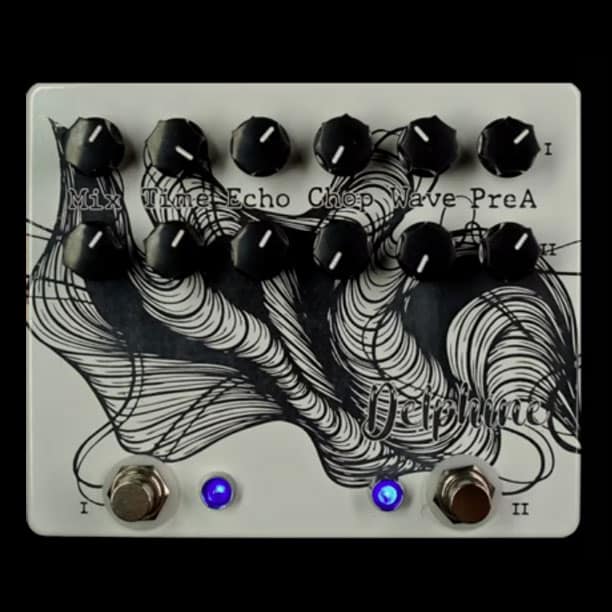 The world will never have enough delay pedals, an effect that lends itself to a multitude of variations. The Tonetuga FX Delphine Delay is not the only dual delay out there, but its emphasis on tape machine-like modulation makes it rather unique.

The two circuits are identical but independent from each other, featuring six dedicated knob controls and one footswitch each.

The delay repeats allow a little bit of noise to flow to emulate the warmth of a vintage tape machine. Set both channels (I & II) with offsetting TIME controls to get the rhythmic repeats of a multi-head delay.

The classic tape machine “wow & flutter” effects can be replicated on each channel using the Chop and Wave controls.

Each channel also has a boost (PreA) simulating the circuits in some legendary tape machines.

Check out the videos of the Tonetuga FX Delphine Delay, below, we added it to our article about the Best Tape Style Echo Pedals.

The delay repeats allow a little bit of noise to flow to emulate the warmth of a vintage tape machine. Set both channels (I & II) with offsetting TIME controls to get the rhythmic repeats of a multi-head delay.

Dial in some modulation using the CHOP and WAVE controls to introduce an undulating effect, reminiscent of tape heads putting stress on the tape. This is your “Wow and flutter”.

The CHOP and WAVE can also be used as a stand-alone chorus by turning the TIME control down to 0-1. Engage both channels (I & II) in chorus mode to really fatten up your signal with overlapping choruses set with different CHOP and WAVE’s.

Each side of Delphine has an independent preamp boost (PreA). Simulating the legendary preamp found in some of the most famous tape echo units of all time. This volume lift was beloved by several guitar icons including Jimmy Page and Eddie Van Halen. While this won’t send your clean amp flying into dirty territory, it will definitely give your signal a pleasant bump.

Each side can be individually configured, so Delphine has your back for ambient exploration, classic slapback, and organic echo repeats.

Mix – Amount of the delay mixed into your dry signal.

Echo – Number of repeats. Single repeats up to self-oscillation.