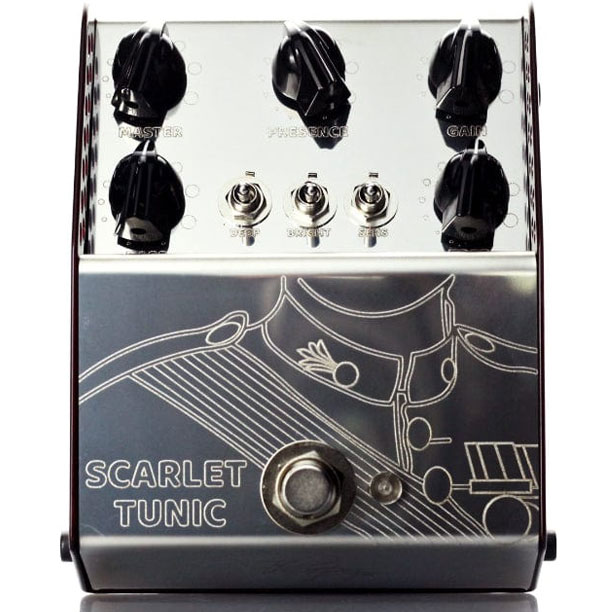 Syd Barret was not your regular electric guitarist – or human being for that matter. His songwriting and guitar work in Pink Floyd’s 1967 debut album “The Piper at the Gates of Dawn” represent some of the most imaginative and “out there” work in Rock’n’Roll history, and ended up defining the psychedelic rock of that decade.

The ThorpyFX Scarlet Tunic is an analog pedal that emulates the sound of Barret’s amp of choice: the Selmer Treble and Bass 50, currently selling for over $2k in the second-hand market.

The project began when Adrian Thorpy was asked by guitarist Lee Harris of Nick Mason’s Saucerful of Secrets to create a pedal that could make his amp sound like Syd Barret’s Selmer. After nailing that tone, the designer went further, ensuring that the pedal could also recreate the tone of other amps used by early Pink Floyd, like the Hiwatt Custom 100 DR103 and the Vox AC30.

Just like the original, it features a 2 knob EQ (Treble and Bass) but adds also a Presence control that affects the upper-mids response, changing the tone’s character

There are also 3 toggle switches: 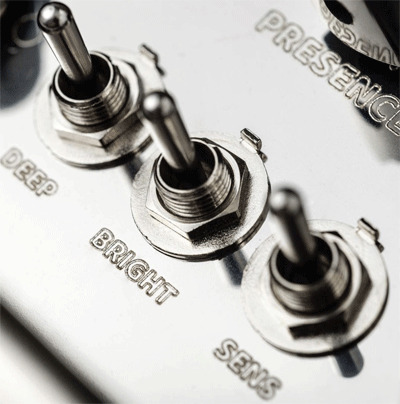 You can hear the results in the videos below.

This is a pedal I describe as an Analog amp emulator. The project came about initially as we were asked to create a pedal that emulated a rare amp called the Selmer Treble and Bass 50. The player in question (Lee Harris – Saucerful of Secrets) wanted a pedal to provide him with the vintage amp tones Syd Barret used in early Pink Floyd music. This was so that he could sound authentic whilst playing on the Saucerful of Secrets World Tour. In the pedal development we made sure that the Selmer was covered tonally but as always, we went further than the initial scope of design. So, as well as the Selmer Amp we also ensured that the DR103 and AC30 style tones could be captured successfully. Fitted with a high-quality transformer, the pedal reacts to your playing and distorts like a full-size amplifier.

THE SCARLET TUNIC as an Analog amp emulator can work fantastically well with your existing amp, your existing pedals and it integrates easily into your current rig. You can use it to create classic vintage amp sounds or craft your own sound. Tested worldwide during its development on the biggest of stages, you can be confident the SCARLET TUNIC will deliver.

To ensure consistency, reliability, low noise and tonal supremacy the SCARLET TUNIC is made with extremely high quality components. 1% metal film resistors, WIMA and Panasonic capacitors where possible and robust through hole plated PCB’S. In short, all of this means you won’t have to worry about your pedal and it should give you many years of inspiring tonal bliss.