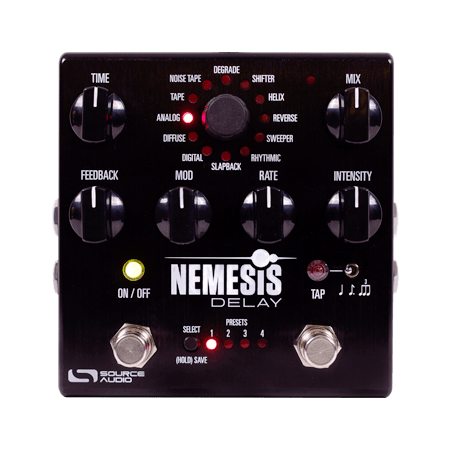 At NAMM 2015, Massachusetts based pedal manufacturer Source Audio introduced an unprecedented number of new products, and a rather surprising change of direction in the cosmetics department: known for their Soundblox series, which were rather “sci-fi” looking pedals, the Source Audio decided it was time to switch to a more classic look, without of course giving up the well known futuristic features that have become the company’s signature, like the flexibility allowed by the digital format and the compatibility with their Hot Hand Wireless effect controller.

Source Audio presented NINE pedals at NAMM, you can see sneak peaks for each in their blog here. The most anticipated of the bunch though is the Nemesis Delay (pictured), which will be available in June 2015. It packs 12 delays ranging from sparkling (Digital delay), to warm and vibrant (Analog delay), and includes realistic Tape effects, as well as wildly animated reverse, octave, and modulating delay effects.

The pedal has 4 user presets, stereo ins and outs, Tap Tempo, 5-pin MIDI in, MIDI thru, and expression control. Onboard controls include Time, Feedback, Mix, Modulation Depth, Modulation Rate, and Effect Intensity. And like all the Source Audio One Series pedals, the Nemesis integrates seamlessly with the MIDI controlled Neuro Effects System.

Nemesis captures the full spectrum of delay effects, starting with a comprehensive collection of meticulously crafted vintage delay tones. The Source Audio engineering team spent over a year studying numerous iconic and sought after tape and bucket brigade delay units with a staunch dedication to identifying their every nuance and idiosyncrasy. The Nemesis’s Tape, Noise Tape and Slapback delays capture all the characteristic flutter, warmth, and color that give vintage tape delay machines like the Echoplex and Space Echo their classic charm. The Analog delay engine beautifully achieves the resonant peaks combined with high and low frequency decay that typifies classic bucket brigade delay pedals. The pedal’s Digital delay manufactures pristine, high definition repeats with or without filtering effects for a classic rack-system tone.
?
At the opposite side of the spectrum, you’ll find an advanced collection of sophisticated and specialized delay effects. The Shifter delay generates perfect polyphonic pitch intervals with repeats jumping to either an octave (up or down), major or minor third, 4th, or 5th. Sweeper applies modulating filter effects to repeats for a unique delay/wah hybrid tone. Backwards effects like Helix and Reverse provide a perfect blend of chaos and control with multi-tap reverse patterns and angelic pitch shifting effects. A Rhythmic delay features an engaging and musical collection of non-standard multi-tap delay patterns.

Job one in the development of the Nemesis Delay was to create a flexible, easy-to-use, and great sounding delay pedal. Out of the box, that’s exactly what it is – plug in, select from the twelve onboard delay engines and make beautiful music… simple. But there is much more here than meets the eye – the truly “Big Idea” behind our One Series pedals was to give musicians a second, far deeper, set of options and editing tools with which to craft the perfect tone. The Neuro Desktop Editor and Neuro Mobile App are free downloads for iOS, Android, Mac, and Windows. They offer a huge collection of additional delay engines as well as an expanded set of editing parameters. Tap into the Neuro Editors’ Oil Can, Binson Echorec, Resonant Tape, Warped Record, Chorus Delay and more. After editing your preset, burn it directly to the pedal and access it easily without reconnecting the Neuro App.

The 12 engines included on the face of the Nemesis represent a perfect cross section of delay effects, from classic essentials to the highly progressive. But don’t stop there, we strongly recommend connecting your Nemesis to the Neuro Mobile App or Neuro Desktop Editor and checking out the 14 additional delay engines not accessible with the effect selector knob. Click the links below for deep-dive videos on some of these bonus delay effects, plus a closer look at the original 12.