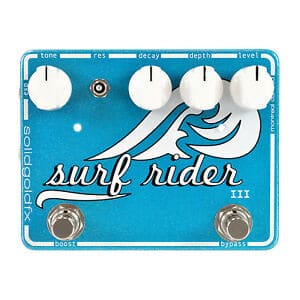 The SolidGoldFX Surf Rider it’s a spring reverb that recreates the lush sound of the Fender amps’ original level and adds several controls for extra versatility: Depth adjusts the intensity of the reverberations; Decay increases the size of the virtual reverb tank; Tone brightens or darkens the reverb; Resonance switch unlocks the “drippiness”, giving you a lot, a little or none at all.

It’s a boutique pedal loved by many guitarists, and it’s included in our shopping guide on the Best Spring Reverb Pedals.

Reverb purists often point to amp reverb as being the pinnacle of spring reverb. That may be all well and good, but what if your amp just doesn’t have reverb? What if your amp’s reverb isn’t good? What if you want more options after a simple “level” control? It is time to ride the waves into the Surf Rider III.

The Surf Rider III is the ‘verb sound that Fender’s engineers would have put into their Deluxes and Vibroverbs if they had access to today’s technology. Our finest ‘verb box gives you that familiar Level control but then adds a plethora of options, including a boost and some nifty resonance features that adds some juice to your tank without the springs.

Versatility is the name of the Surf Rider’s game. The Level control is just the beginning, adjusting the amount of reverb in the total signal. The Surf Rider also offers a Depth knob that adjusts the intensity of the reverberations, for some hauntingly huge verbs that fill the room. The expression jack on the side overrides this control, should you feel so inclined.

The Decay control increases the size of the virtual reverb tank, opening up the pedal and giving you verb tones that go on seemingly forever. Speaking of tones, there’s a handy Tone knob that brightens or darkens the reverb signal, which helps tame harsh pickups or beef up flimsy ones. It’s especially helpful if the Surf Rider III is your only pedal—a splendid idea.

The Resonance switch unlocks the “drippiness” of the reverb tank, giving you a lot (upper position), a little (lower position) or none at all (center). Cracking open the Surf Rider III gives you a trimpot to set the lower level for just the right amount of splash.

The Boost section lets you boost or cut the reverb level. With the LED on, the pedal is in Hi mode, and off is Lo mode. There’s another internal trimmer that lets you dial in Lo mode. Surf’s up.