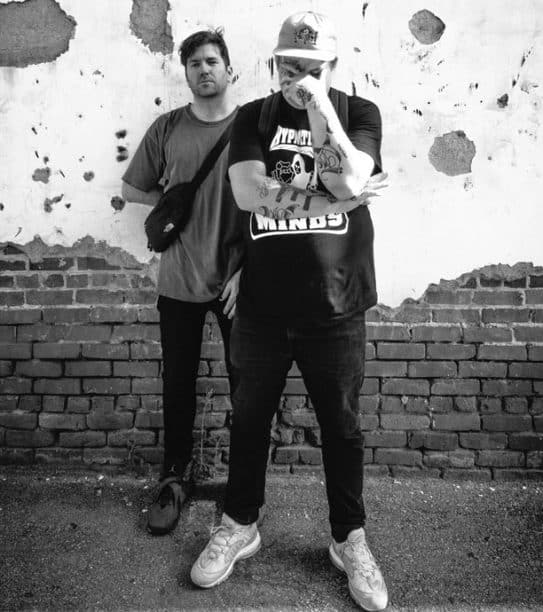 “Punishing” isn’t the first word you’d think to describe Soft Kill, but the more its barrages of post-punk and shoegazer pummel into you, the more fitting the word becomes. On Savior, the Portland outfit buries most of its synths into a thundering vessel of fuzz. Moments of joy surface occasionally, only to get smothered in a wave of rumbling drums and crashing cymbals. In its relentless hail of gloom and doom, Soft Kill is here for the raw ennui. – Tucker Pennington

What has it been like, for an electro-rock band, to work with a primarily metal-centric label like Profound Lore?

Tobias: I don’t know if we’re “electro-rock” but you’re right that we’re pretty out of place on Profound Lore. For us it’s been a blessing to work with someone who cares so much about pursuing our own vision and standing out hasn’t hurt us at all. We did “Savior” really soon after “Choke” and I think 90% of labels would have said no way to that, but Chris knew it was part of our story and necessary and didn’t fight it one bit after hearing the material. I really respected him for that.

Your most recent album Savior features synths in a much more subtle. What inspired this change in focus?

Tobias: The first album was written (mostly) around guitar and synth, with the latter being the bass line essentially. It stayed a foundational or melodic element in the sound from then on due to habit, but “Savior” was written primarily in and around a hospital setting during a really emotionally tumultuous period in my life. Guitars have always felt more organic and aggressive to me and because that fit the vibe, synths took a back seat. They either manifested themselves as mostly textural or to reinforce bass elements, but in several cases, they just didn’t feel necessary. In hindsight, it was good to step away from what people expect from us and whatever genre they lump us into.

Do pedals and synths affect your songwriting in some ways, or are they just part of the sonic arsenal you use for arrangement/production goals?

Conrad: I don’t have any sort of set formula for writing. some ideas start with a sound or a particular effect, some start with a chord progression, etc. pedals and synths come into play in lots of different ways throughout the process.

Is there a guitar pedal that kind of changed your life – so to speak?

Tobias: The first pedal that truly blew my mind was the Foxx Tone Machine. Fuzz & octave combined changed so much about what I was doing way back when. I’d pair that with an actual Maestro Echoplex and that’s the first time I realized a guitar could do almost anything. In more recent years the Catalinbread Belle Epoch Deluxe pushed me in totally diff directions as a songwriter. Can’t say enough good stuff about that thing.

Conrad: I guess the Boss DS-1 and my first delay pedal. When I discovered how much noise I could make playing along to sonic youth records or how much I could change the sound of what I was doing from just a guitar plugged into an amp.

Could you send us a picture of your current pedal setup and briefly tell us how you use each stompbox?

Tobias: My MXR Micro Amp is just a boost for single note stuff when I don’t want it to be too distorted.

I use two “distortions”, the Tube Screamer being for leads and anything that needs a little dirt and sustain, or simply to beef up a power chord. The EQD Acapulco Gold turns my guitar into Black Sabbath-lite, and paired with reverb it’s the perfect heavy shoegaze sorta tone. I’ve always loved the Sunn Model T’s so it’s cool to have that in a little box. 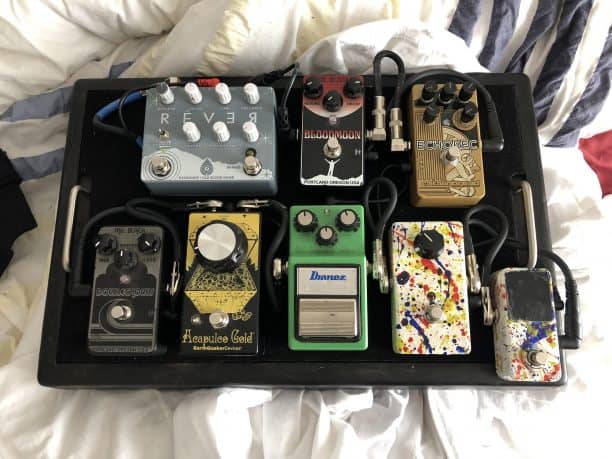 Mr. Black’s Double Chorus is one of the only pedals from them that has lasted more than one tour with me. It’s my favorite chorus and been on my board since 2016. I do my best not to overuse it though.

My Catalinbread Echo Rec stays on 24/7 and is just set to what I consider “normal,” making my notes blend the slightest bit with a short tail. This and the Belle Epoch Deluxe are my favorites but the latter distorts my current guitar a bit too much so I’m back to the Echo Rec for live stuff.

Mr. Black makes two reverbs I like: the Ambience, which they discontinued and the Bloodmoon which sounds so much better than the Supermoon. Whatever they did to darken up the circuit goes a long way. The Bloodmoon stays on 24/7 as well and I tweak it for either short verb or really blissed out parts where I still need my parts defined and not completely washed away. I just added the Old Blood Noise “Rever” for interludes and when I want the reverb to go a bit overboard. I’ve got it set to one way but am excited to dig in and see what else it can do. The reverse momentary switch is something I don’t use in songs yet but is a really cool touch. 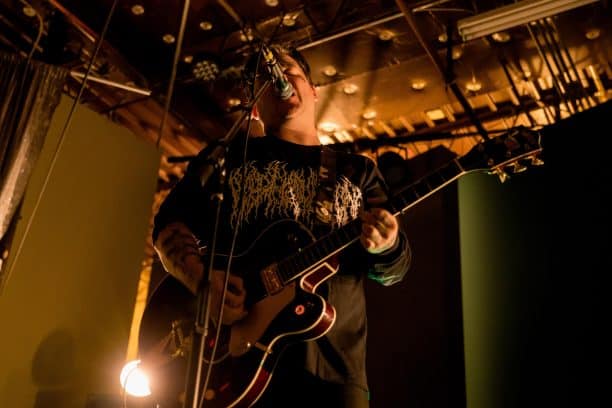 Conrad: I have a few effects that are kind of always on. I always use a digital delay and a tape-style delay in kind of offset times and always use reverbs. stacking different delays and reverbs is always something I experiment with. I have a Supermoon by Mr. Black out of Portland that gives me the ability to have my standard reverb and then a “favorite” setting that comes in to play for washier, bigger parts. The Earthquaker Devices Palisades, which is based on a tube screamer has taken the place of two different drives on my board because it gives me the option of stacking the A and B gain stages, and then the boost when I need it. That is followed by the Moog MF Drive for more of a fuzz sound. I use different chorus and tremolo pedals from time to time. Right now a Boss Super Chorus and TR-2. My pedalboard was built by our friend Chase at Decay Audio. It’s beautiful and sturdy (and really heavy, so it gets replaced by a Pedaltrain Novo for trips to Europe –or if we’re doing any flying in the states) and also gives me the opportunity to hide a few things under the board where my power supply lives. 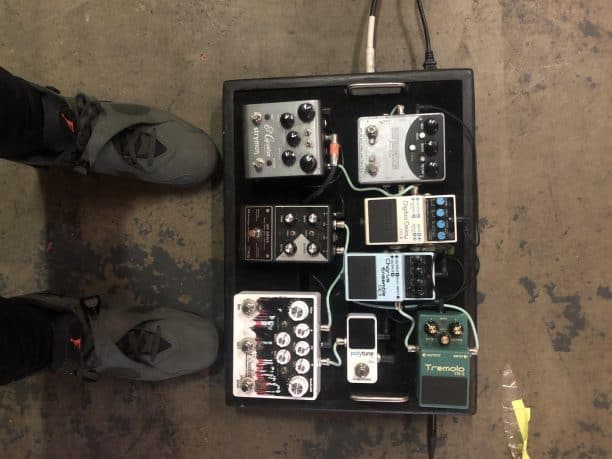 You guys played our event linked to the Austin Pedal and Synth Expo during SXSW.  What are your favorite artists you discovered at the Austin festival?

Tobias: Portrayal of Guilt and Candy were the only bands I actually got to watch.

Conrad: We played with some rad bands at SXSW. Some that we already know and love and some that we were seeing for the first time. IN MIRRORS and Numb.er were highlights for me, but my favorite set that I saw was watching Paul Wall through a fence in an alleyway.