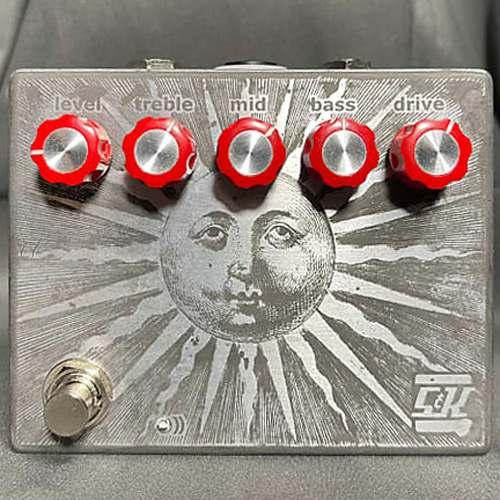 Notwithstanding their “solid-stateness,” the now discontinued Sunnn Beta Lead amps from the late ’70s and early ’80s have a stellar reputation among hard rockers, mostly because of Curt Cobain, who used three of those heads when gigging, and they are starting to get rare and pricey. The SNK Pedals CMOSludge is an overdrive pedal voiced after those amps.

This stompbox recreates the preamp channel of the Sunn Beta and embeds it in a pedalboard-friendly case, for all to enjoy at the affordable price of $225. As you may expect, it packs a lot of gain, and although it shines when pushed hard, it delivers usable tones at all gain levels, both on guitar and bass.

Its interactive, 3-way EQ section broadens the tone palette even further, in particular thanks to its Mids knob, which allows to dial in mid-scooped or cutting midrange tones.

Have a listen to the edgy sounds created by the SNK Pedals CMOSludge in the videos below.

SNK pedals has taken a preamp channel directly from the Sunn Beta Lead amplifier, pedalized it and powered it with a pedal board friendly 9v supply. Controls include: Level, Treble, Mid, Bass and Drive.

The CMOSludge can be run one of three ways.
1) into the front end of your amplifier like a typical distortion pedal
2) into the series effects loop return, bypassing the preamp
3) into a power amp or slave amp (i.e. a sunn concert slave)

All housed in a powder coated Gorva S90 enclosure with UV printed graphics.