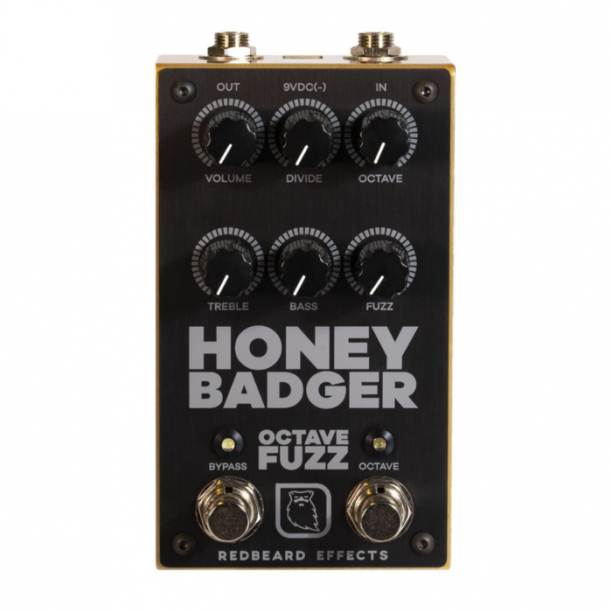 This is a completely original circuit that picks up where traditional octave fuzzes left off by adding an additional octave down thanks to the Divide knob, which allows you to blend between a combination of -2 and -1 Octaves, whose volume can be controlled via the Octave knob.

Prepare to change everything you know about Octave Fuzz pedals. The HONEY BADGER™ Octave Fuzz is here to demolish the competition and melt some faces! *

Named after the world’s most fearless creature, the Honey Badger™ Octave Fuzz truly does not give a f**k. Thick skinned and unbelievably aggressive, this golden box of doom does not care for pleasantries and goes straight for the tonal jugular.

We took the much loved concept of the Octave Fuzz and got crazy with it. We’re fans of deep down & dirty guitar/bass tones, so adding an Octave down to a gnarly fuzz circuit seemed the clear way to go. But wait there’s more! Why should we settle for one octave when we could add a second octave? So we did that too! Thanks to the interactive ‘DIVIDE’ knob, the Honey Badger™ allows you to blend between a combination of -2 and -1 Octaves for the ultimate subterranean tone experience.

Smash all of that glitchy, subby madness on top of a gnarly, inspiring and interactive fuzz circuit, and you’ve got a truly unique effect that takes no prisoners. Use the Honey Badger™ as a searing Fuzz that will set your tone apart, or combine with the onboard Octave effect for downright ludicrous amounts of fun and creativity.

Like all our pedals, the HONEY BADGER™ Octave Fuzz was dreamt up, designed, engineered, built, tested and packaged in the UK by hand.

* The HONEY BADGER™ Octave Fuzz pedal will not literally melt your face or anyone else’s face.