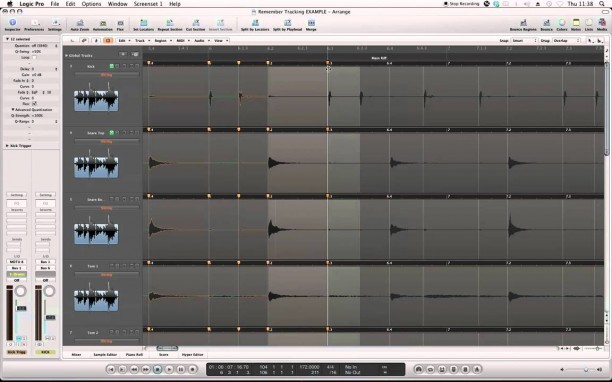 The average indie musician is way sloppier than – say – folk or metal ones, and although music fans into genres like lo fi and garage rock can cope with drumming that’s not tight, it’s not a good idea to have drums too out of time even on the most lo-fi of records. Also, unless you have a few extra hundred dollars to hand to your sound engineer to tighten the drum tracks, you should probably learn how to do it yourself.

Ideally drums should be recorded to a click together with the bass, and both instrument tightened with editing before the other instruments are recorded. During editing, the click will allow you to have a visual reference of where the “perfect” tempo is compared to the drummer’s hits. If the click isn’t used, you’ll have to adjust things relying exclusively on your sense of rhythm. 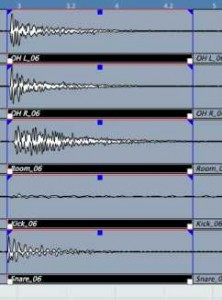 The most important thing when editing multi-track drum recordings is to make sure you ALWAYS cut, paste and move around ALL the drum tracks at once – DAWs have ways to group them to facilitate this. After you do that you can start cutting and moving hits that are late or early, and replacing ones that are weak or bad. Click with the scissor icon on the single drum tracks (kick, snare, tom) rather than the overheads, since those get each sound a little later because they are farther from the source. Always make sure you do the cutting a few ms before the hits (see picture) and then – to “cut out” a hit – just before the next one.

If a gap is created when you move the hit earlier or later, cover it by extending the section of the sample that has silence on it – i.e. make the beginning of the following sample earlier, rather than extending the end of the hit you moved, because you’ll find another hit on the latter.

If the drum you are cutting has a long and bassy decay like a tom you may want to experiment with crossfades to make it sound as natural as possible. Editing one track separately from the group sound should be only a last resort measure – since this is something that might create weird phase related effects.

Crossfades help remove clicks and are crucial in editing, but with drums should be kept as short as possible, and away from the hits’ attack.

Also, don’t be afraid – occasionally – to replace entire drum parts with identical, better performed ones: As long as you avoid too rigid quantization and keep some of the human factor in the performance, nobody will realize the drums were edited.

For a cleaner sound – and to save hard disk space – you may want to delete all the tom section that don’t have any hits (toms might resonate during the performance, creating an unwanted boominess. This can also be achieved with a gate plug in, which “predicts” when the hits is coming – that way you don’t lose any of the attack).

If you recorded the bass together with the drums, I find it useful to create a copy of the bass track, group it with the drums and edit them together, keeping the original Bass track ungrouped for backup just in case.