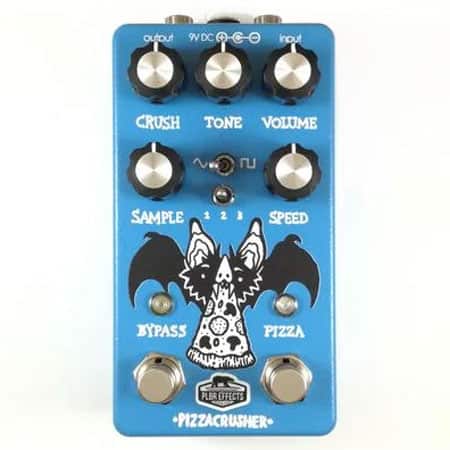 Born as rude DIY experiments made by small boutique manufacturers, in a few years, lo-fi pedals have evolved to become intricate circuits filled with functions.

The Pizzacrusher, by Croatian manufacturer PLBR, is such a device. The usual bit-crushing and sample-reduction basic effects are integrated with a series of other functions like a Fuzz placed before the bitcrusher, a tone control, and – in particular – a Pizza function!

The Pizza function has its own footswitch and consists in a modulation effect applied to the bit crushing, which means that the number of bits will keep changing according to the functions’ settings: there are three modes: Random, Arp (up and down) and Trem – the first two can be controlled through the Speed knob.

CRUSH: Controls the amount of bitcrushing

SAMPLE: Controls the sample rate of the signal, changing the frequency of the bitcrusher oscillator

VOLUME: Controls the master volume of the effect

PIZZA: When the PIZZA switch is activated you can choose between 3 different automated controls of the CRUSH and set the rate with SPEED

1 2 3 MODES: When the PIZZA switch is activated you can choose between 3 different automated controls of the CRUSH and set the rate with SPEED